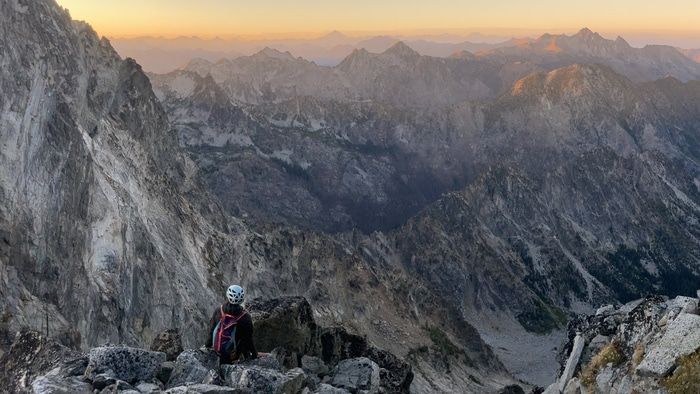 I woke up the next morning from the type of deep sleep that makes you forget where you put your phone the night before. Eventually I found it in the pocket of my puffy and we snoozed it for another hour. Going to bed the night before we both had a “let’s see how we feel in the morning” attitude, but now we were going to have to move if we had any chance of making it up Sherpa. The technique for me is to just fire up the stove and see how I feel, make and eat the oatmeal and see if I still want to go, filter the water and so on. Each small action added to the snowball effect and by 6:45am we were packed and walking on the Ingalls Creek trail. 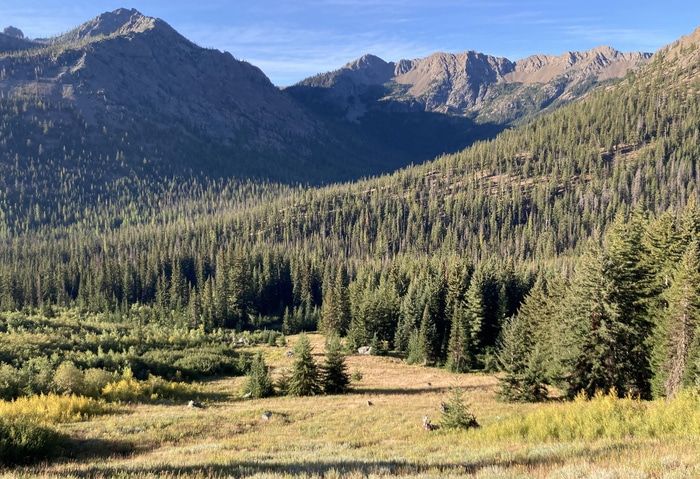 Heading up the meadow from Ingalls Creek

The uphill trail to Sherpa starts on climbers left of a meadow or you can start in the bushes to the left, but the best track is eventually through the trees. It was a nice change of pace to quickly make out way up dirt switchbacks after bush whacking the day before. The trail we were following actually leads to Mt. Stewart, so around 1500’ up we abandoned it and headed right on a sandy, loose trail over a ridge and into the next drainage basin. This involved some sliding and elevation loss and if we ever go back I’d like to try going up on the ridge. 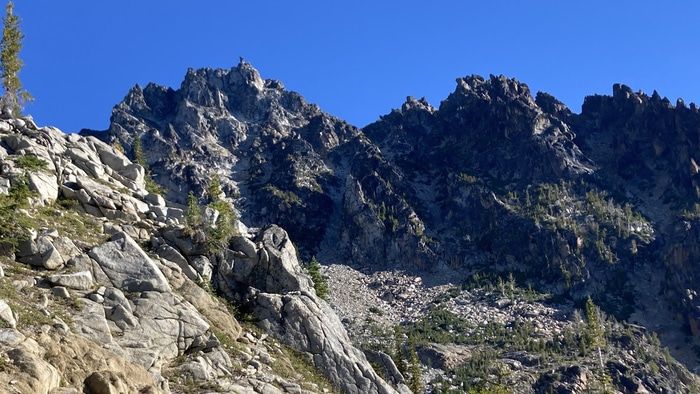 In the next drainage basin was the start of a boulder field. We could clearly see Sherpa and the balanced rock so we started uphill hopping over boulders. We found an occasional cairn but not clear trail and I was surprised to find water still running through the boulder field. We filtered the water and then soaked our shirts in it to stay cool in the midday sun. We continued hopping boulders most of the way and our shirts were dry by the time we approached the start of the climb. I was happy to find the west ridge still had some morning shade and we stopped to rest, eat and put on our harnesses. It was noon. 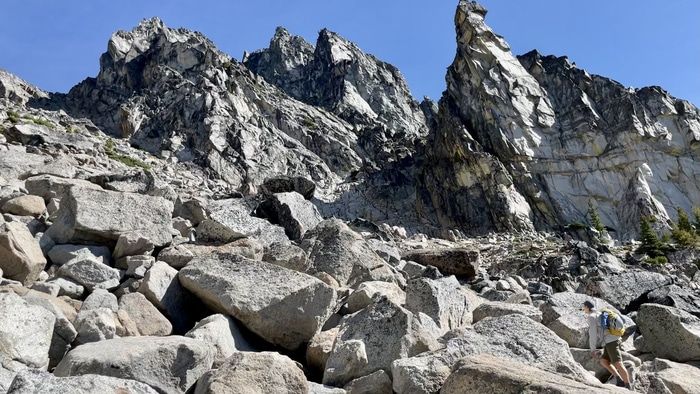 Heading up the boulder field

We scrambled up a chute to the start of the climb and were roped up, ready to go at 12:30pm. With three more pitches and five more rappels than the day before, we were on pace for another “epic” descent. Big shout out the Melanie Stam for this recent trip report. Cassondra took some screenshots and it was a huge help trying to navigate the route. Pitches 1 and 2 were straightforward. 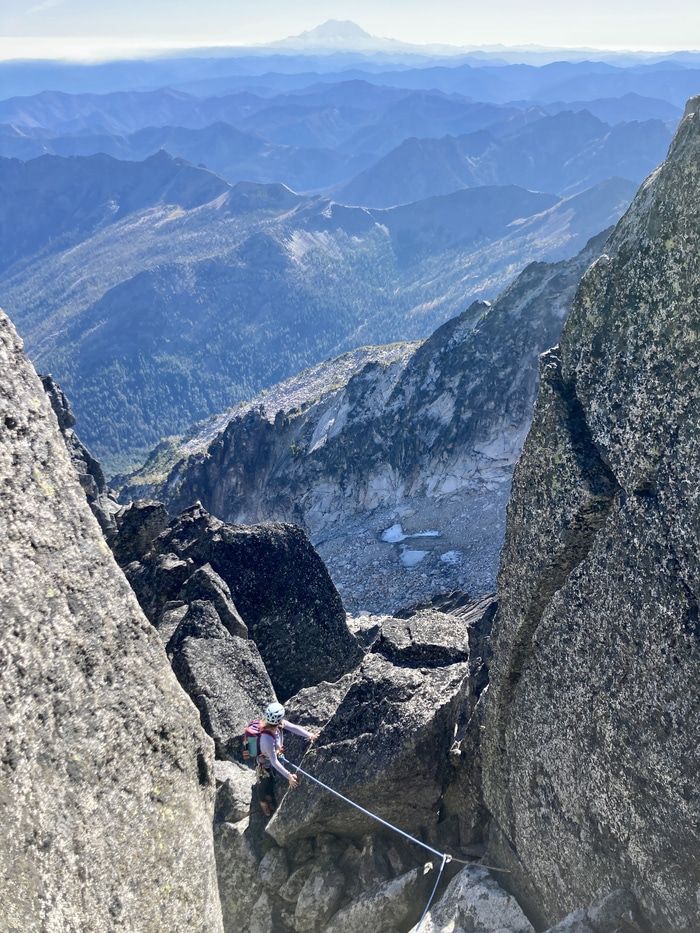 On pitch 3 I made some mistakes. The first 2 pitches had preset anchors and I did not grab a cordallete for the third pitch which required you to build an anchor. I took the harder 5.7 hand crack variation and used most of the gear. The screenshots we had also only showed the start of the pitch and I had to down climb repeatedly when the description did not align with what I was seeing. Eventually I decided it was best to traverse to a rappel anchor which was off route, belay Cassondra up and retrieve the gear I needed. I probably could have protected the traverse better for my follower but after holding my breath Cassondra made it across. 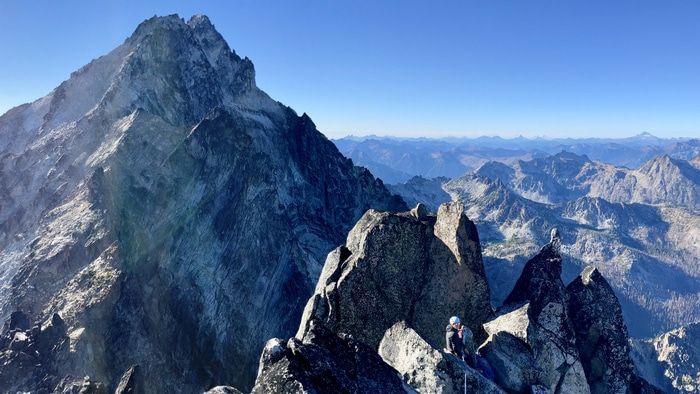 Cassondra belaying with Stewart in the background

From the rappel anchor (pitch 3.5) we went straight up and got back on route. Pitch 4 was an easy scramble and that brought us to the crux. Pitch 5 looks like a lightning bolt. Up/right, across left and up/right again. On the upper section is the “bear hug” where you place your hands in two parallel cracks running 2 feet apart and hug your way up. It must’ve been a long day because I spent some time thinking I had lost 2 quickdraws. I thought Cassondra had them, then I thought we lost them along the way and eventually I realized that I had only brought 5 not 7. I guess that was the only pitch I felt like I wanted 7 pieces on. I was really proud of Cassondra for making the bear hug move because it was difficult and if she fell I wasn’t sure we could have finished the route. 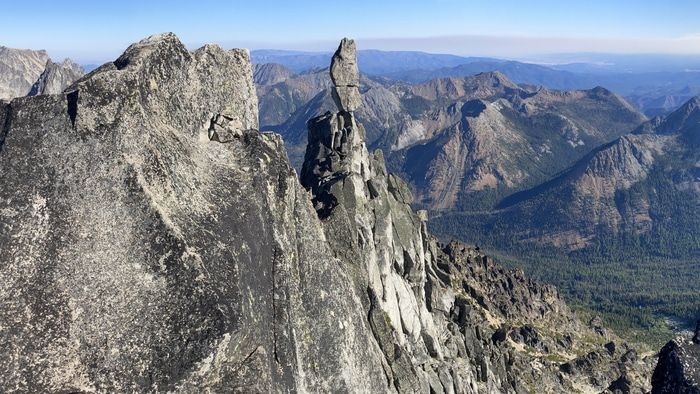 The sixth pitch was basic and we topped out around 5pm. It took some time to find the summit register. Hint: it’s buried in a cairn on a sketchy ledge. June 9th, 1985 was the first entry. I was almost 2 at the time. Did not attempt to get to balanced rock because it seemed out of our pay grade. Also, we sometimes average an hour on rappel so we were on schedule to get off the climb around 11pm. We actually moved pretty fast and arrived at the base just past 7pm. Perfect timing to catch another beautiful sunset over the Teanaways. Picture diarrhoea ensued. And then it got dark. 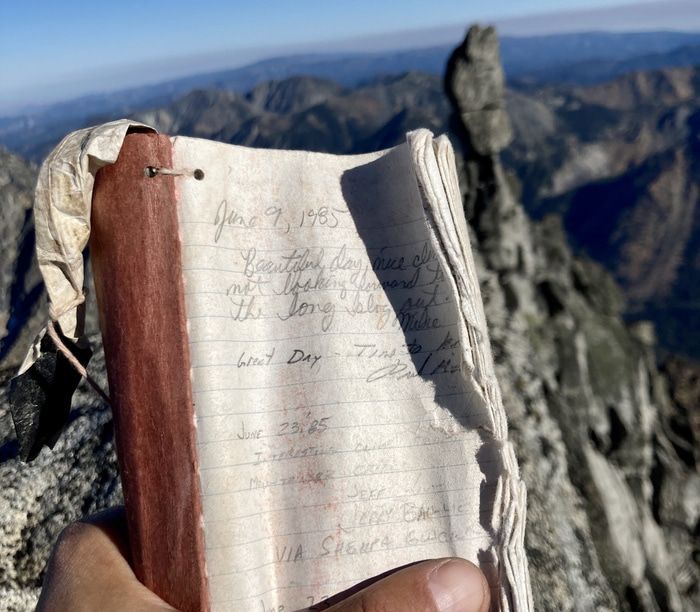 “…not looking forward to the long slog out” - relatable content, 35 years later

By our best estimate, we were about 4 hours from camp and another 3 hours from the car. My phone was hovering at 3% battery. Cassondra did a much better job saving her battery and we could check the GPS every few minutes to make sure we were heading the right way through the unmarked boulder field. The most difficult part was finding the gully that took us into the neighbouring drainage. There was no trail, cliff bands everywhere and we were running our headlamps in low-light mode. If the headlamps or phone died we would be spending the night and Cassondra had to be at school in the morning. 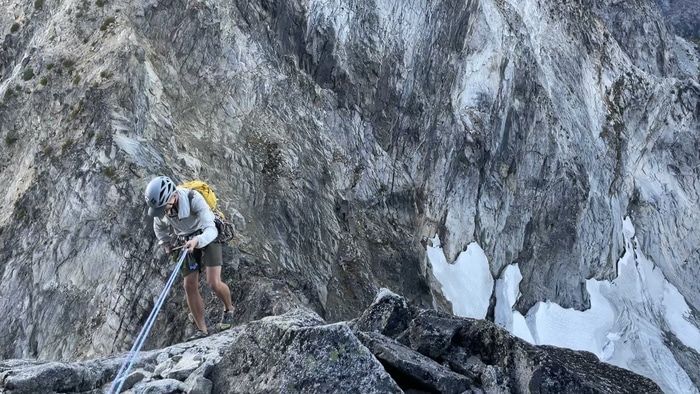 We spent some time walking in what felt like circles as the GPS was going wonky and we could not see far up or down the slopes but eventually we made it across the ridge and back on a clear trail. At this point we knew we would make it but there was still hours to go. We got back to camp just after midnight and packed everything in our 60L. Sorry to our neighbor there who heard us arrive close to midnight both nights and never saw us in the morning. With heavy packs we started to the parking lot around 12:30am. The temperature had dropped into the 40’s and we were cold and tired but we pressed on at a steady pace. At 2:30am Cassondra’s headlamp died but she still had some phone battery left and used the flashlight. We arrived at the car around 3:30 in the morning. 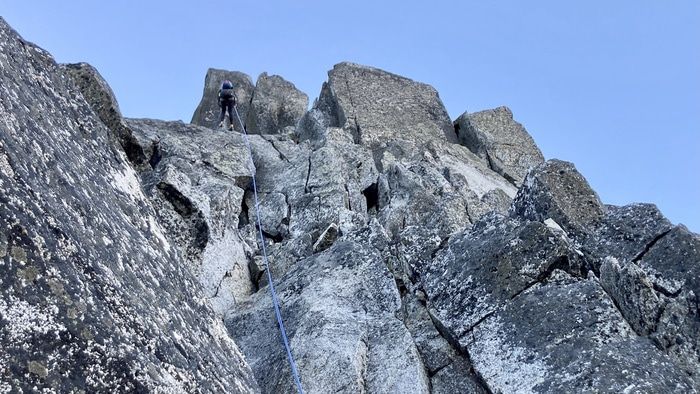 I drove the first 30 minutes and then needed to switch so Cassondra took over. I fell asleep instantly and woke up as she pulled off of I-90 around the pass because she felt like she needed to sleep. I felt pretty refreshed so I took over and got us home around 6am. We left everything in the car but our feet were so filthy we had to take a shower and finally passed out for an hour before it was time for Cassondra to get up and ready for school. I got up in solidarity. I don’t know how Cassondra survived but I ordered a large pepperoni and pineapple pizza when she got home and we watched some Bachelor in Paradise. I think we went to bed around 8pm. 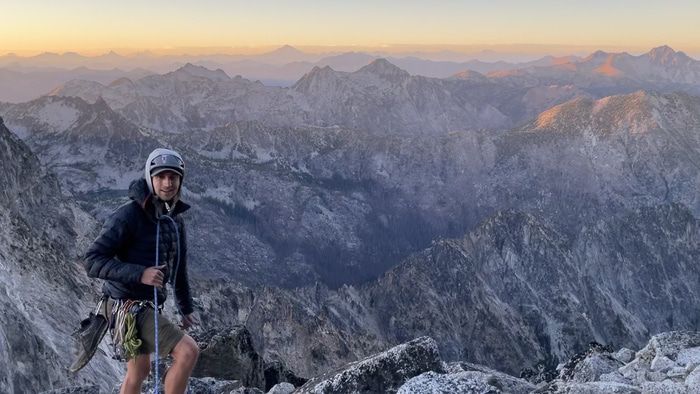 Packing up to start the walk out. Wow! That sunset

Yes the finish was a bit rough and I think if we ever do another big double header like this we should bring a power bank, but it was very special to be up there with the sun going down. It being Labor Day weekend, I couldn’t believe we didn’t see another soul up there. We’ve done a lot of alpine starts, but I really enjoyed these sunsets. There’s less rush knowing you’ve already made the summit. It’s the warmest part of the day so you can just stop moving and enjoy the stillness. We both had a really hard time leaving and I think a bivy date is definitely in our future. 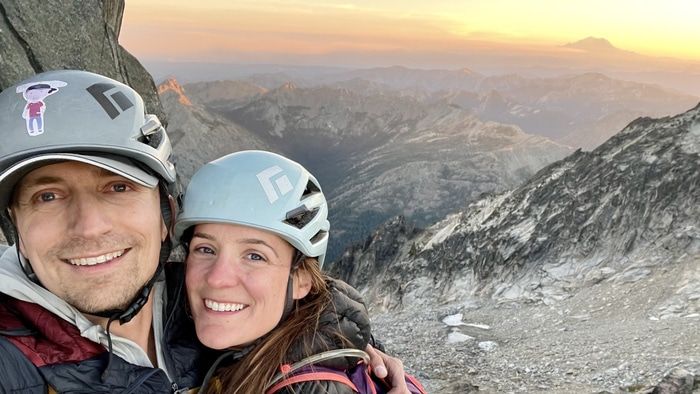 Granite Peak, highest point in Montana I picked Cassondra up at the Billings airport at 2:30pm. I got a flat tire on the van about an hour before she landed and I didn’t have a spare because I recently ditched it to make room for her... Continue →