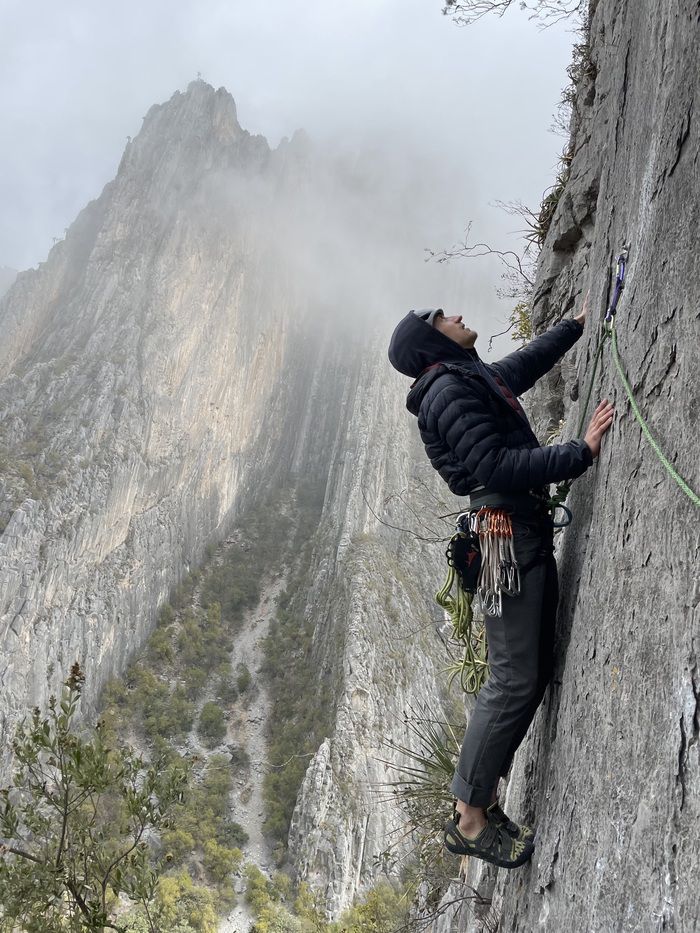 Cassondra had school vacation in February and we decided to check out El Potrero Chico. Because we are very last minute planners, we didn’t book cheap flights ahead of time, but did manage to find a last-minute, week-long, all-inclusive package (flights, hotel and car rental) from Expedia for around $1000. The main downside was that the hotel was in Monterrey, about an hour drive from Potrero Chico. 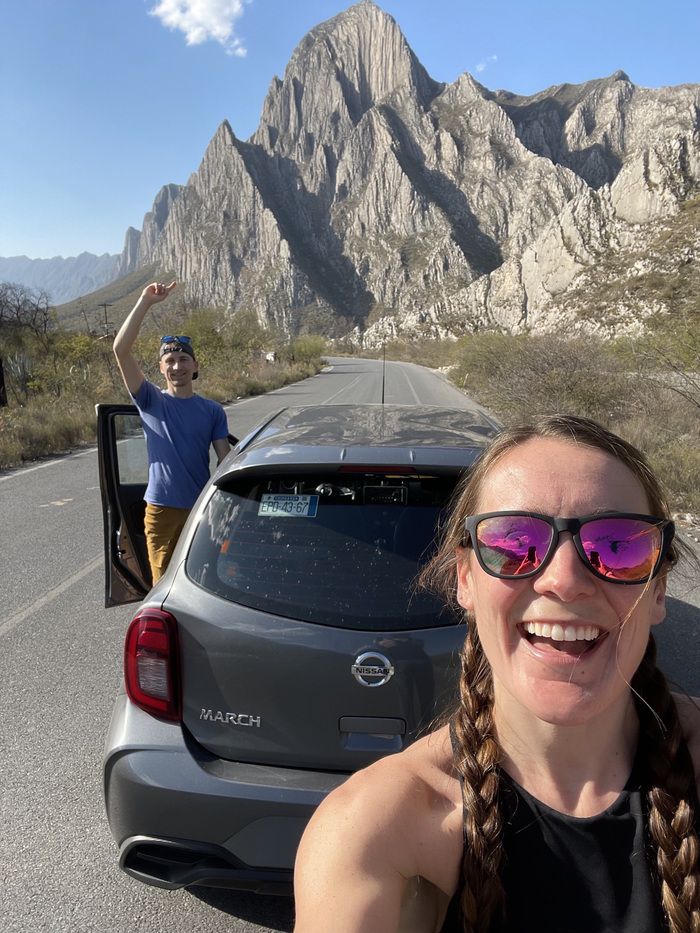 Driving around in the Nissan March

We left Seattle at 7am, laid-over in Houston and landed in Monterrey in the early afternoon where we were presented with a freshly washed Nissan March. It was still early so we decided to forgo the hotel and head straight to see Potrero Chico. It was dark when we arrived, but the canyon was illuminated with floodlights (appears to be a weekend thing) and as we walked through the gate we occasionally glimpsed headlamps rappelling hundreds of feet above us. We grabbed a bite at La Posada campground which was filled with climbers and headed back to our hotel in Monterrey for the night.

We woke up early to beat the heat and drove to a local hiking trail. It was 4000’ of elevation gain to an antenna array overlooking Monterrey. Surprisingly, the trail was paved the whole way. About half way up is an abandoned restaurant and if you climb on the roof for dawn, you will get the best views of Monterrey. I was amazed to see locals running up in the midday heat. 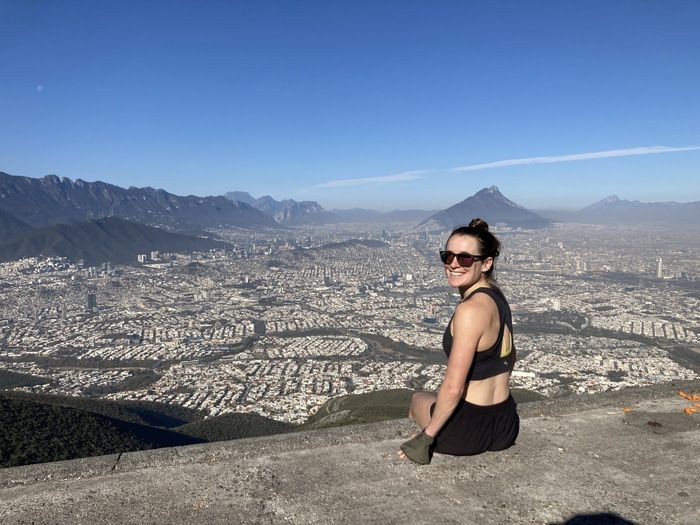 Looking down on Monterrey

In the afternoon we checked out La Huasteca canyon which is a competitor to Potrero Chico but has less shade, only 1/3 of the routes and is a bit more spread out if you don’t have a car. It seems popular with locals as we were the only foreign climbers there. We climbed one 5.8 route for sunset and decided to call it a day.

Our first full day at Potrero Chico. Driving in Mexico is stressful. I’m not used to the signs and many roads are single lane with slower traffic expected to drive on the shoulder. Some traffic lights are also ignored while other obeyed and I don’t know why. But we did make it to Hidalgo in one piece and climbed the very closest wall to the canyon entrance. There is a pool complex in the canyon that is closed in winter but on this day they were blasting some fiesta music for everyone to hear. Our favorite climb on this day was a short 2-pitch called The Blacksmith (5.9). It has a commanding view of the canyon and we celebrated with a Tim Hortons doughnut that we brought along inside Cassondra’s chalk bag. 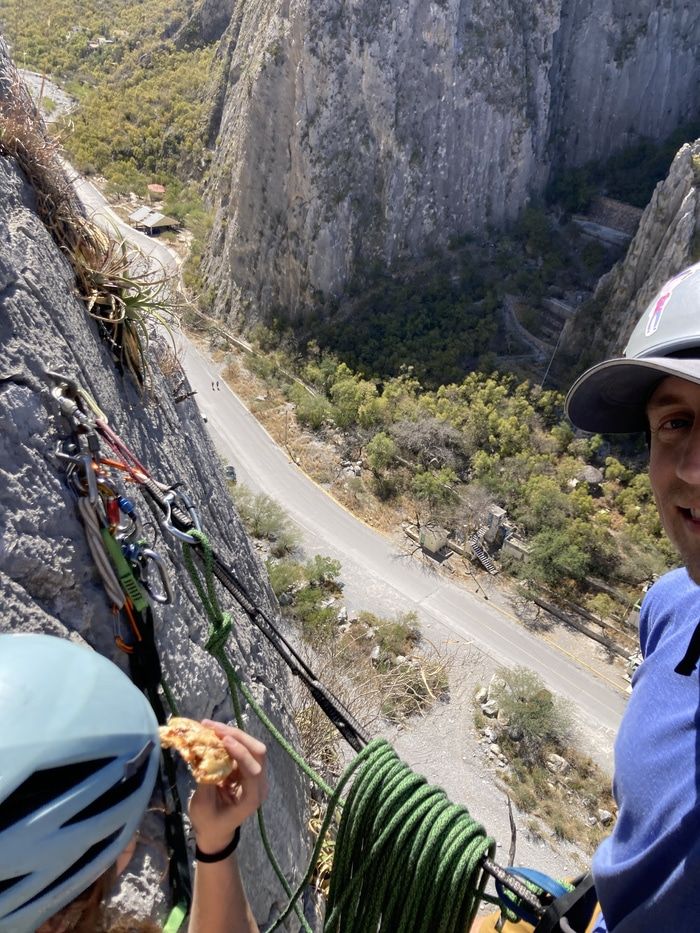 Donut break atop The Blacksmith

That night we decided not to drive back to Monterrey and camped at La Posada instead. There was a catwalk competition where climbers strutted some interesting apparel and the night culminated with everybody jumping into the pool in their undies close to midnight. We got terrible sleep as strong winds blew through the campground most of the night, shaking the tent and coating us and our gear in sand. 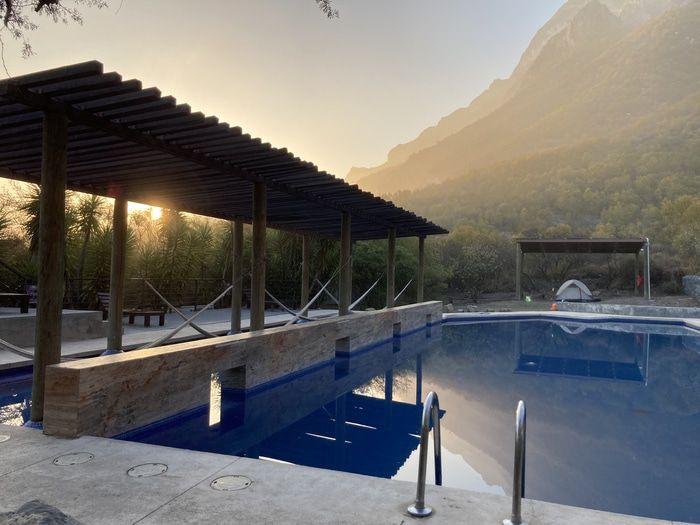 Due to bad sleep, we opted for some single pitch in the shaded Virgin Canyon. We climbed a few 7’s, 8’s and 9’s. It was pleasant to recognize and chat with a few climbers from the night before. You start to feel like a local quickly. Hidalgo is a small community and walking the roads has a peaceful rural feel. An occasional local will give you an “Hola!” or strike up a conversation. One older gentleman asked us how many pitches we were climbing today and when we asked him if he was a climber himself he responded by saying, “I don’t climb. I love my life too much.” 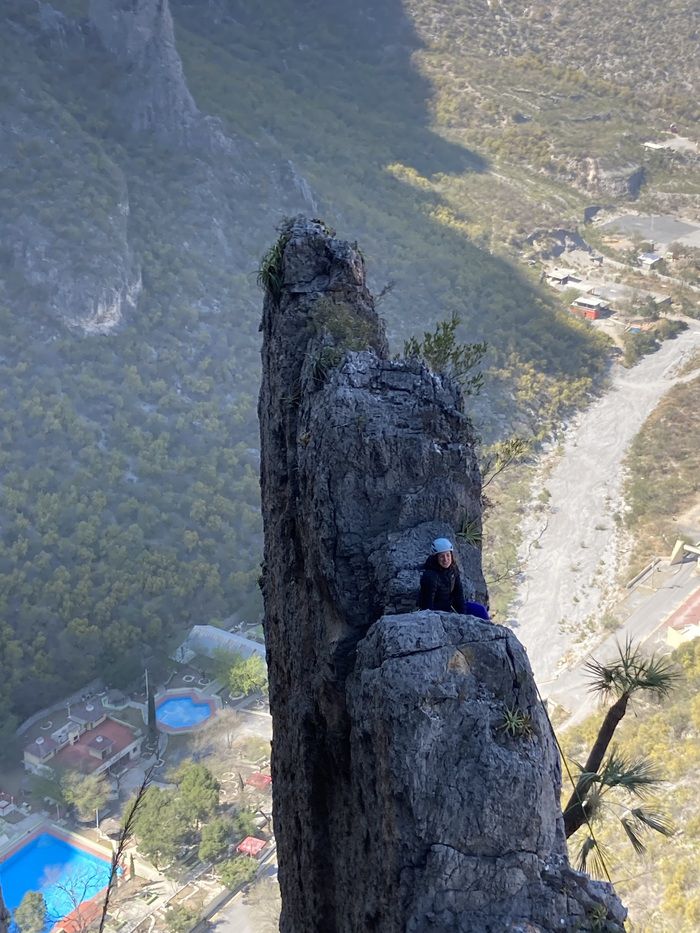 Cassondra on top of Will the Wolf Survive

After a night in the hotel we were ready to do a bigger multi-pitch. Will The Wolf Survive was 4 pitches of 4-star climbing and the biggest challenge we undertook on the trip. We got there early, but not early enough so we climbed behind another party of two. It was nice to watch them point out the cruxes but waiting got cold at times. At the top of the third pitch I climbed right past the anchor bolts and belayed off the rappel anchor which caused a minor traffic jam as the other party started their descent. The view from the top was a bit disappointing so this climb is about the journey, not the destination. Having a 70m rope allowed us to descend in 3 rappels instead of 4.

The weather was starting to turn cold and rain was in the forecast. We went for a hike up Potrero Chico canyon road. Our destination was a giant oak tree a few miles down the road but we walked right by it (hint: it’s on your left). Instead we walked to the end of the road where we found an old rock quarry and some abandoned machinery. 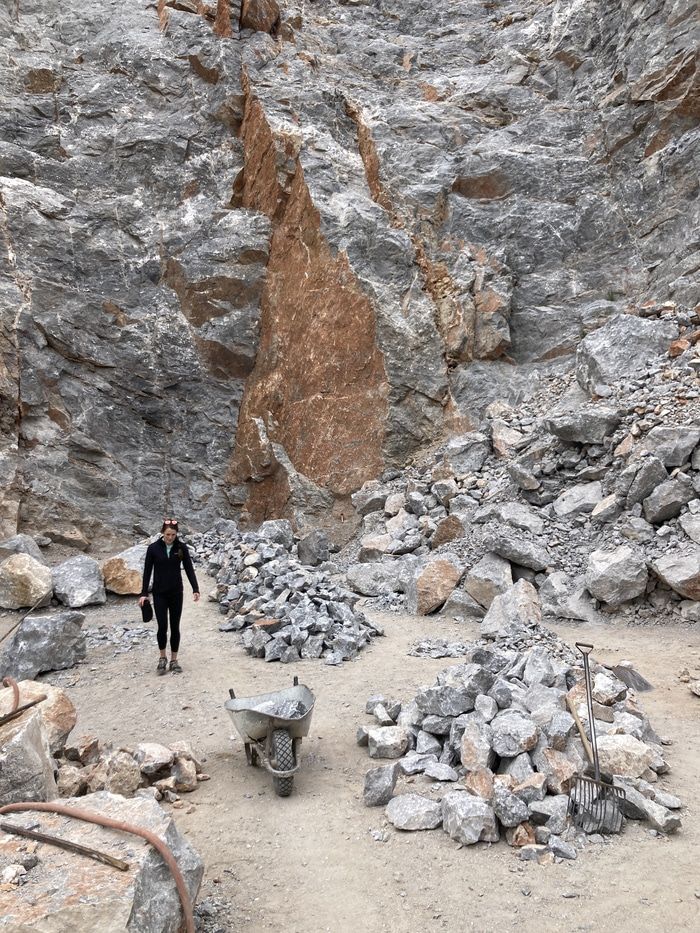 Quarry at the end of the canyon road

It still hadn’t rained by evening so we started Las Chimuelas, a 3-pitch route, but bailed after the first pitch because it was getting dark. That night we stayed at La Posada campground again, but this time in the cabin so we wouldn’t be traumatized by the wind. 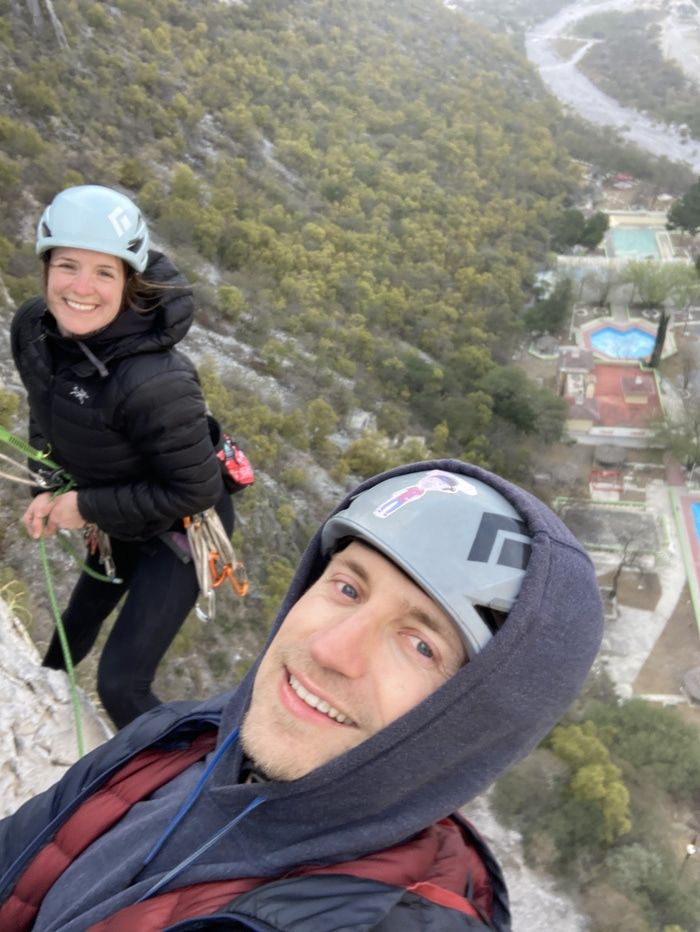 Our last full day in Mexico. In the morning we drove to San Joaquin Hot Springs. It wasn’t all that “hot” but it was nice to soak after a long week of climbing. On the way back we stopped at Tacos Richard Jr, our favorite place to eat. For out final hurrah we climbed the three pitch Ramsey’s Shenanigans. It was pretty cold but one of our favorite climbs because for low effort you get great views of the road and pool complex below. We headed back to Monterrey for our last night where we made street tacos and street corn for our final Mexican meal.

We got the the airport a 3am so we could return the rental car and take an antigen COVID test available at the terminal. Everything went smoothly and we were back in Seattle that night. 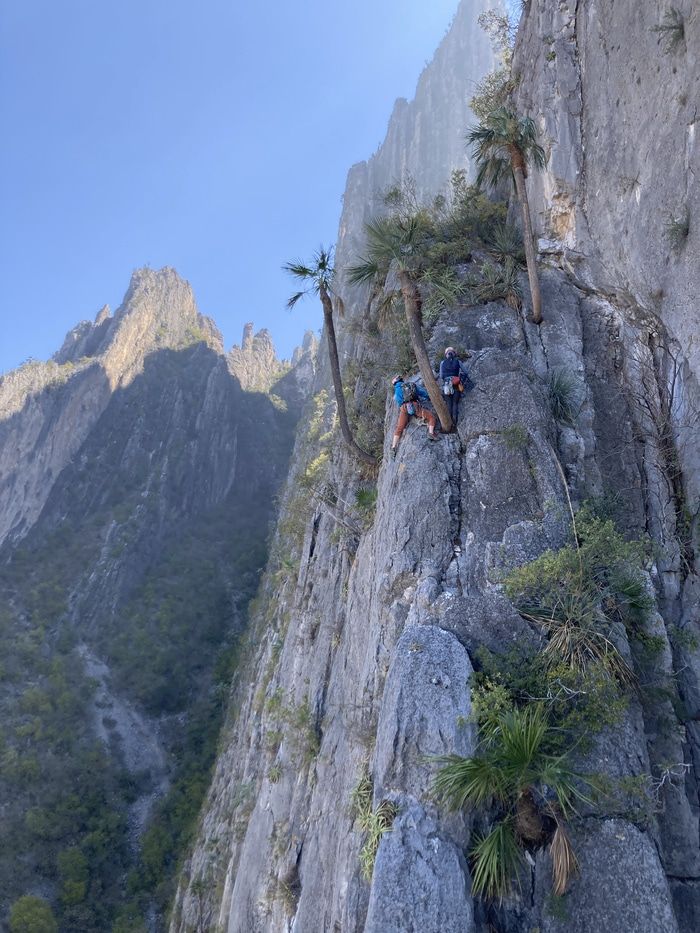 I really enjoyed this trip. Potrero Chico is one of those places where you can disconnect from the outside world and meet climbers living mostly carefree. It has all the modern conveniences but retains a slow and tranquil way of life. The multi-pitch options are plentiful and if you can lead one or two crux pitches the rest mostly go at 5.9. I can’t wait to go back.

ShadeMap now displays the sunniest and shadiest locations over the course of a day. Click the full day sun exposure button located near the lower left corner of the screen to try it in Manhattan. Initially ShadeMap answered the question:... Continue →