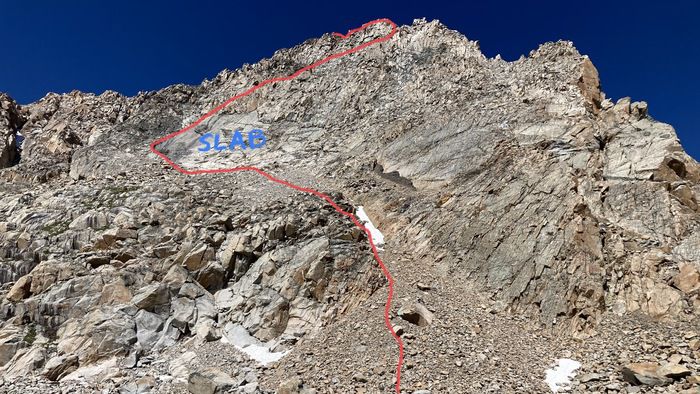 I picked Cassondra up at the Billings airport at 2:30pm. I got a flat tire on the van about an hour before she landed and I didn’t have a spare because I recently ditched it to make room for her gear in the van. Murphy’s Law was in full swing. Fortunately the tire still had enough air left to drive it to a nearby tire shop and they had it patched in 30 minutes. That left me with enough time to shower and show up triumphantly in baggage claim a few minutes early. 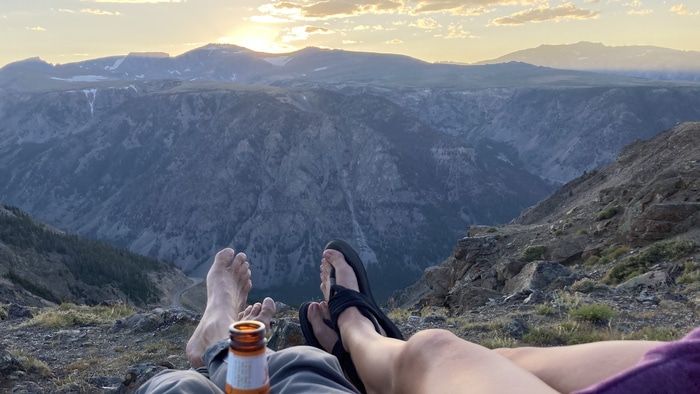 We stopped at the Billings Walmart to grab some groceries and headed south towards Red Lodge. After packing our backpacks in a shady spot next to Rock Creek we rewarded ourselves with a pepperoni and pineapple pizza, which we took with us up to Beartooth Pass. We ate the pizza while watching the sun set behind some of flattest mountain peaks I’d ever seen. Not very inspiring, but hidden somewhere beyond their square silhouettes was Granite Peak. 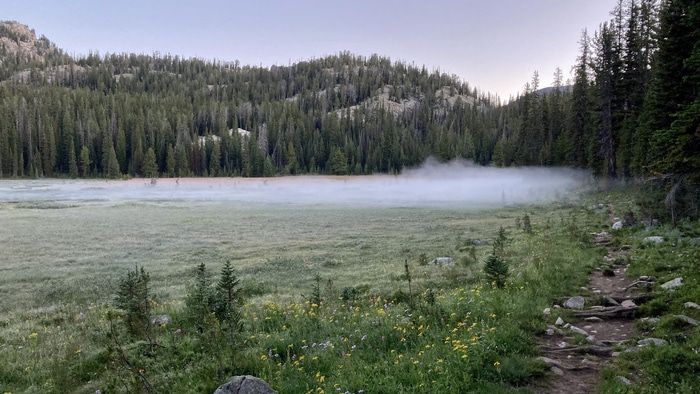 Lady of the Lake trail

We drove down the pass and took a right onto a dirt road just shy of Cooke City. The van almost made it to the recommended trailhead parking but some deep ruts in the dirt road made us stop .2 miles short of our goal. We parked on the right side of the road next to the ruins of a large building. It was dark now and the skies were clear. The alarm was set for 3am. 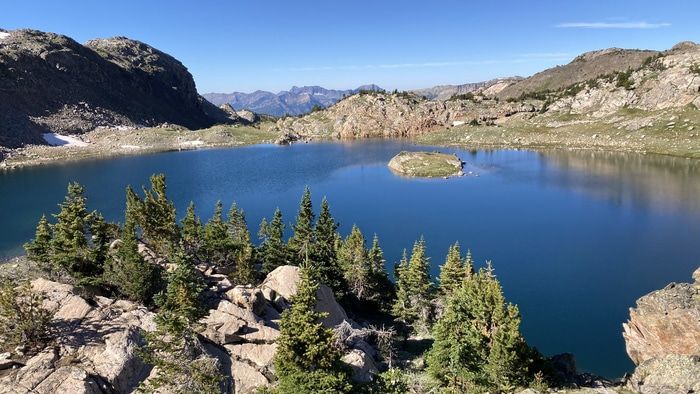 We hit the snooze a few times but were walking just after 4am. It got light out as we passed Lady of the Lake at the 2 mile mark. At 3.5 miles we left the main trail and tried to cross the Broadwater River. The rocks were insanely slick. Cassondra fell into the water but managed to keep her pack dry and I resigned myself to removing my shoes and crossing bare foot. On the other side of the river we found an obvious trail and followed it through a few more stream crossings, until we hit Lone Elk Lake. 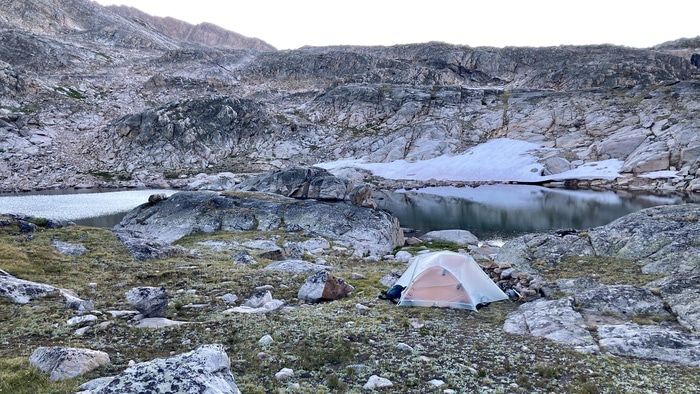 From Lone Elk Lake the trail was less obvious but we had a GPS track loaded on our phones. We met a couple coming off the mountain and they told us that you could bypass all the snow on the mountain and we could leave our crampons and ice axes behind. It was now 10am, the sun was intense, the alpine lakes had virtually no shade and I was regretting snoozing the alarm and not starting out earlier. 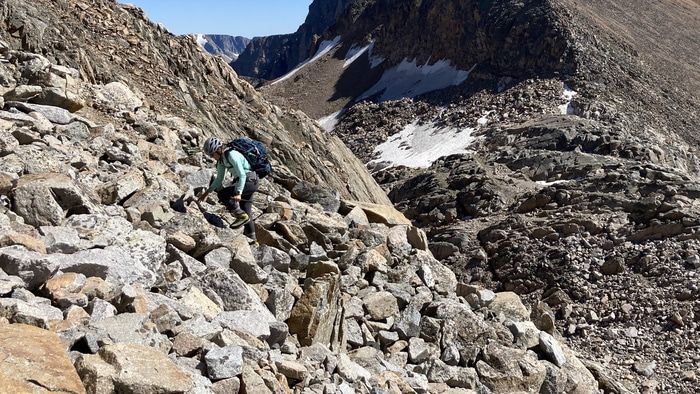 Starting to scramble up

Going around the Sky Top lakes proved slow. There was an occasional cairn but we mostly hugged the lake shores as we boulder hopped and scrambled up stream. By noon we decided there was diminishing returns to hauling the gear any closer to the mountain and we decided to pitch the tent on the largest of the Sky Top lakes. I think we were about 10 miles in and about 2 miles from of the summit. 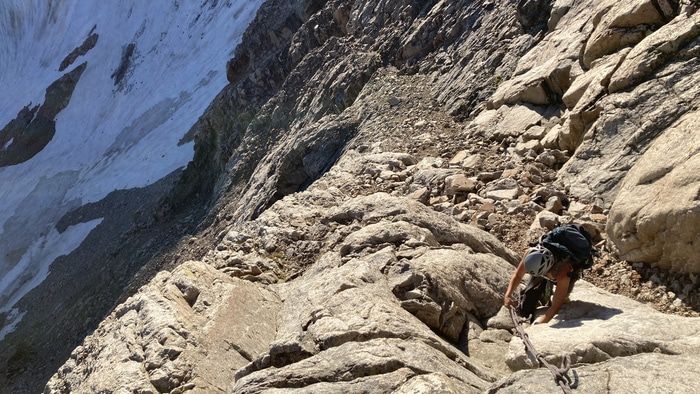 The original plan was to go for the summit early the next morning but the weather was clear and we knew no one would be on the mountain in the late afternoon. The other five people camped nearby had gone up in the early morning and were already back at their tents. We decided to give it a try and if we couldn’t get to the Slab by 4pm we’d turn around. I read up on Kanye and Kim’s divorce while Cassondra tried to nap. We quickly filtered water, repacked and were back on the trail at 2pm. 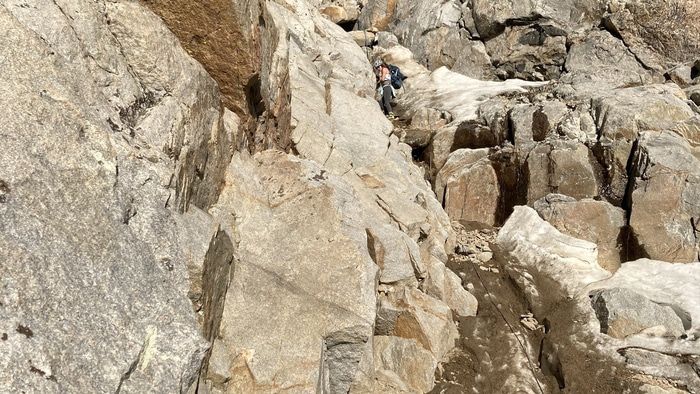 We went around the left side of our lake and then crossed Sky Top creek below the final two lakes. From there we mostly straight-lined for the Slab crossing an occasional snow field to save time. The southwest couloir seemed insanely steep from far away but the slope diminished as we approached. As everyone had mentioned the rock was loose everywhere and each step was deliberate in order to keep things from slipping. We did reach the slab at 3:58pm but at that point we had already expended so much energy that we were going for the top even if we were a little behind. 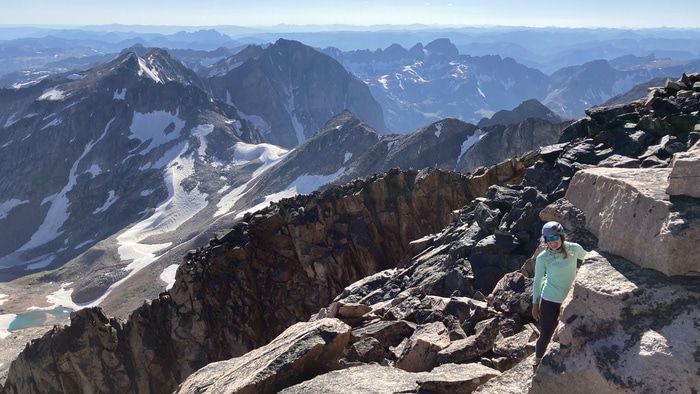 We traversed next to the Slab until a large cairn informed us it was time to head into the couloir. The climbing wasn’t extremely steep and very quickly we hit some fixed lines, the second of which was through a nasty section of ice and mud. After that it was more scrambling and the crux of the route was a tricky overhang with a fixed rope. The rope seemed short and the next day we met a guy that said the rope had broken as he down climbed the day before, resulting in a fall of 10 feet. He was shaken up but able to walk out. 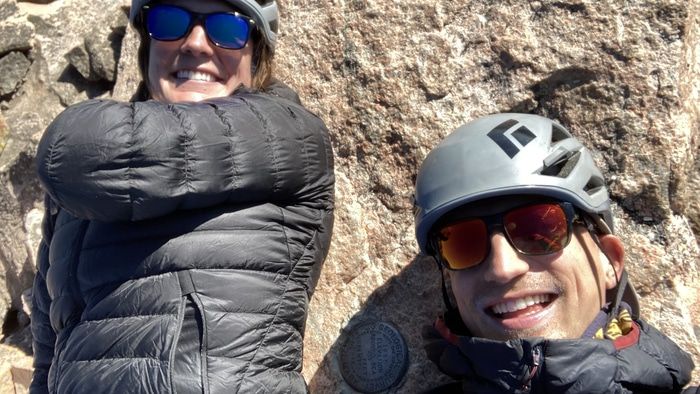 We did some acrobatics to get through the overhanging section and then we were on the ridge line, the rock falling away for about a thousand feet to our right. We hit the summit just after 5pm expecting to be alone, but another party of 3 showed up at the same time using the standard route. We shared some celebrations, meat sticks and took a flurry of photos. They had a ways back to their camp and went down first. The summit was all ours now. The air was still. The temperature pleasant. The view incredible. It was hard to leave. 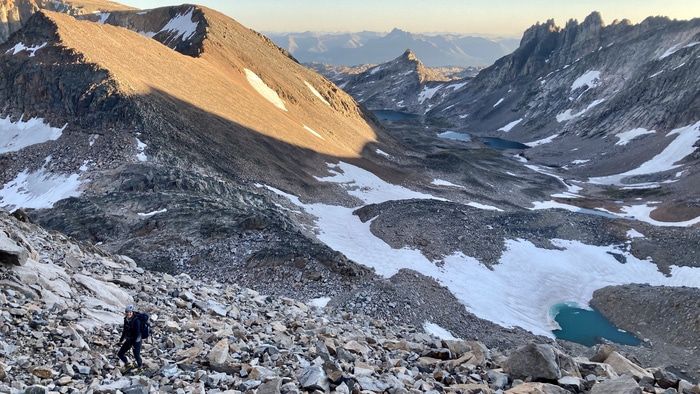 Heading back towards camp

But we did. Just after 6pm. The way down was slow, once again being mindful not to kick any loose rocks. We exited the couloir at 7:30pm and scrambled down most of the steep rubble by 8:30pm. Feeling safe, we took a celebratory shot of Fireball, put on some tunes and slogged it through the dark until we eventually found our tent. It was 10pm. We lay exhausted on the shore of the lake, looking up at the stars. The air was still. The silence incredible. You could almost hear your heart beating. I couldn’t recall a night on a mountain as calm as this one.