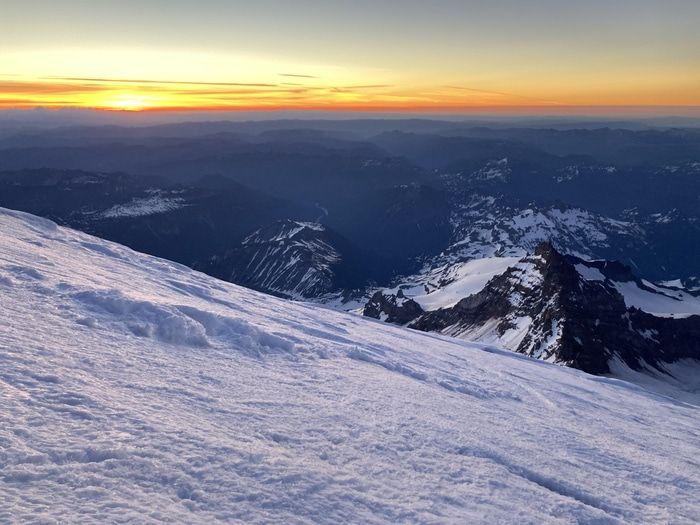 I first tried to climb Mt Rainier in 2011 with my friends Jordan and Jake. I had just spent the previous week on the John Muir trail camping above 12,000’ so I felt acclimated and confident I could do it. Jake was not feeling his best that day and stayed at Camp Muir. Jordan and I called it quits around 5am at Ingraham Flats. I’ve had a nagging feeling over the years that maybe we could have made it that day, but we weren’t really committed to trying. Stopping due to objective hazards like weather absolves you from failure, but giving up with gas in the tank can eat at you sometimes. 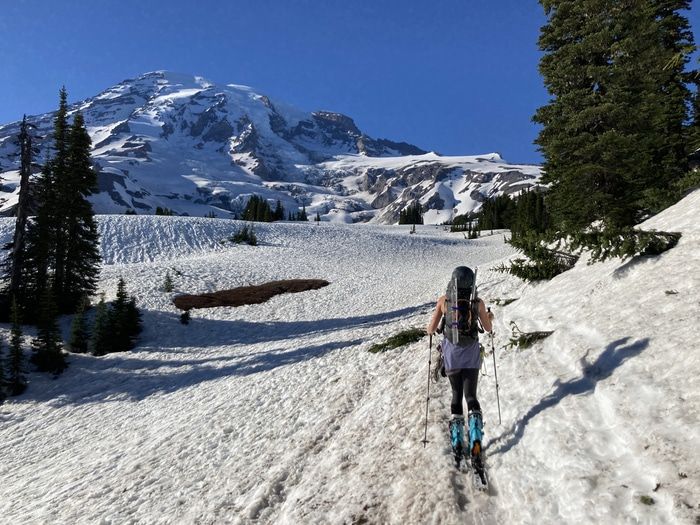 Well, I got a chance at redemption this week. Cassondra and I are very fortunate to be able to plan climbs on short notice and the weather on Sunday night was incredible - summit temperatures just below freezing and wind speeds at 5-10 mph. In order to climb Rainier you must reserve a camp site in the park’s “alpine” zone. This includes single push (car-to-car) attempts and we were lucky enough to snag the last two available permits for Muir snowfield; Camp Muir and Ingraham Flats were already sold out. 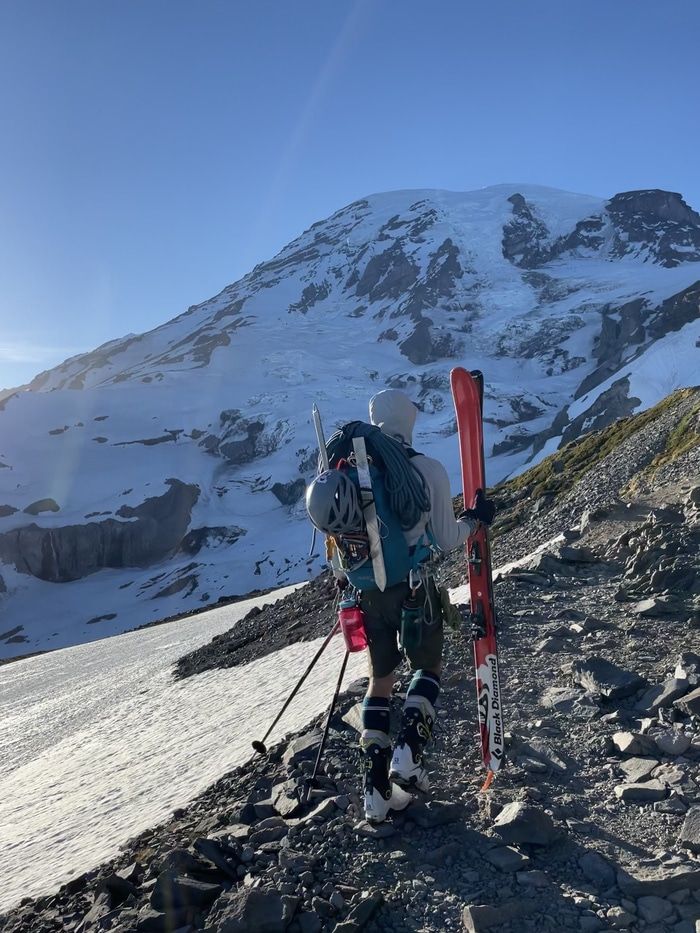 Cassondra and I have often pondered what it would take do Rainier in a day. I always imagined we’d have a game plan of parking the van at 7000’ for a few days to acclimate and switch our sleeping schedule, but in the end we just winged it. Cassondra went to Father’s Day brunch and I went strawberry picking with some friends. We met up around 1:30pm and drove to the park to pick up our climbing permit. At 4:30pm we crawled into the back of the van for a restless 45 minute nap and then it was time to get ready. 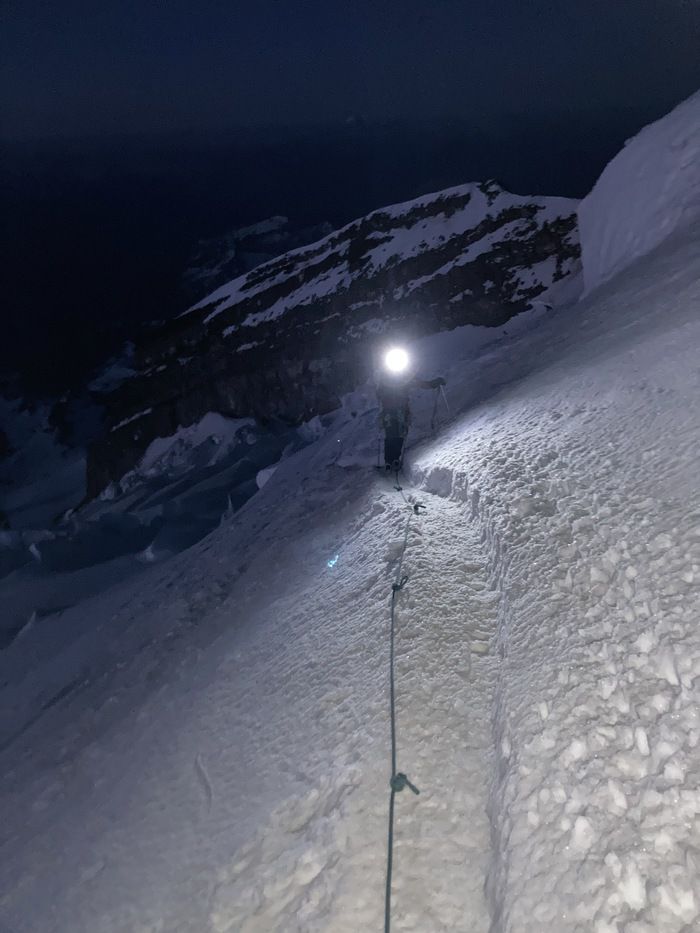 We both took 30 liter packs. Half of the space was taken up by our mountaineering boots since we planned to start by skiing up to Camp Muir. The rest was taken up with dry base layers to change into at Camp Muir, puffy jackets and shells, crampons, a Jetboil for melting snow, headlamps, food, etc. We wore our harnesses out of the parking lot. For glacier travel we packed a 60 meter rope with break knots because there’s enough spare rope on the ends to drop a loop to the fallen climber. We didn’t consider that break knots make it impossible to clip through protection, but felt safe bypassing it on the upper mountain. 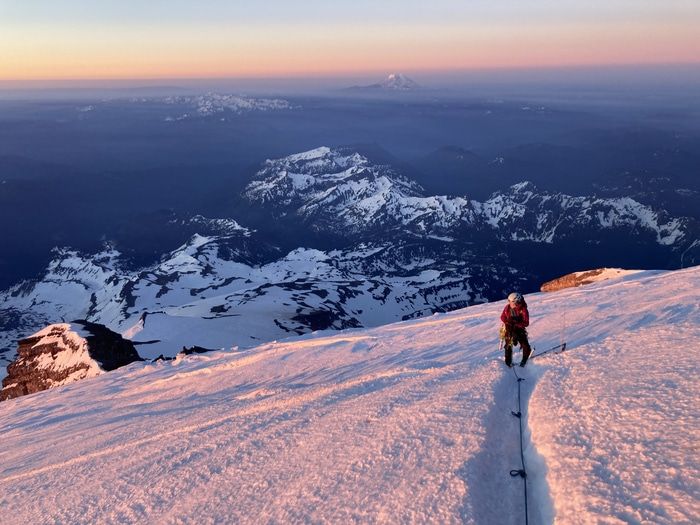 Sunrise on the upper mountain

We started up around 6:30pm. The snow was wet and our skins had no trouble gripping. At Panorama Point we had to boot up some steep snow and after that it felt like another mile of melted out rocks before we got on snow again. Cassondra wisely strapped her skis to her backpack while I fumbled carrying my skis in my arms. The wind picked up at this time and it was a low point where we both started feeling not up to the task. Luckily, the temperature was pleasant and soon we found ourselves all alone on the Muir snowfield with the last rays of sunlight hitting Adams and St. Helens behind us. 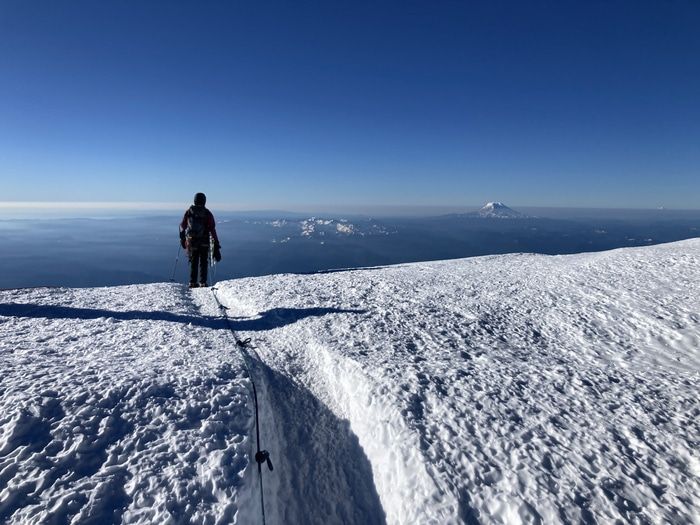 We arrived at Camp Muir at 10:30pm. There are awesome toilets there now and we used them to change into dry layers and our mountaineering boots. It took about an hour to chop out, melt and filter 4 litres of snow water. We roped up and set out by ourselves at 12:30am. The route was well marked and we set a comfortable pace up the mountain. We crossed a few snow bridges and made our way up the rocky cleaver. From there it was what seemed like shoveled out switchbacks the rest of the way. We reached the crater rim around 5:45am along with several parties that we joined on the upper mountain. 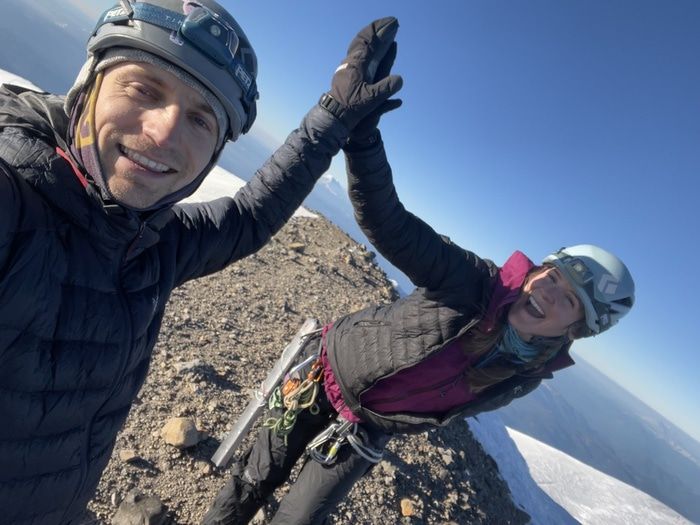 A few tears of joyous exhaustion were shed. Neither of us was convinced we could make it when we set out. Everyone on top made the pilgrimage to the opposite side of the rim where the true summit is. However, nobody knew its exact location and together we wandered around the rim like a group of lost tourists. Hopefully we stood on the actual summit at some point. Rainier is rather isolated from other mountain ranges and dwarfs above everything so it felt like looking out of an airplane window. Nothing really stood out. The seracs and crevasses on the glacier were much more fascinating. 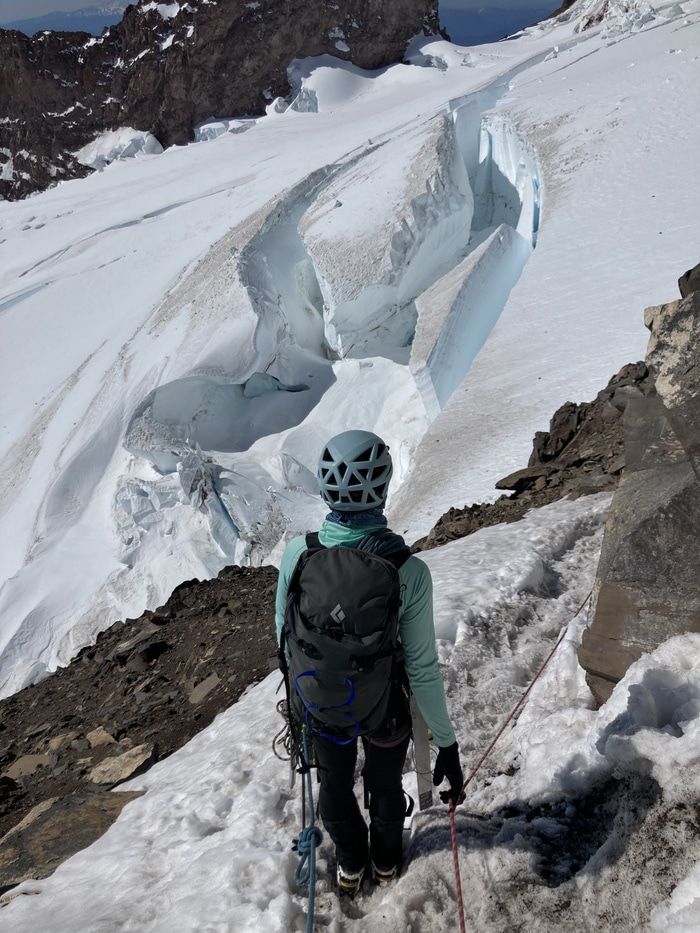 The descent was much more painful. The sun seemed to be at full strength by 7am. Shade was nowhere to be found. We had to stop and de-layer twice and were surprised on approach to Camp Muir when someone greeted us with a “good morning”. Judging by the intensity of the sun, we were convinced it had to be noon. We took about an hour to repack at Camp Muir. The skiing was great but our legs were exhausted. Having to carry our skis through the rocky terrain of Panorama Point broke me and I don’t even remember when we got back to the van (maybe 2pm). It felt like the hottest day of my life. Feeling much more accomplished and less hot today. 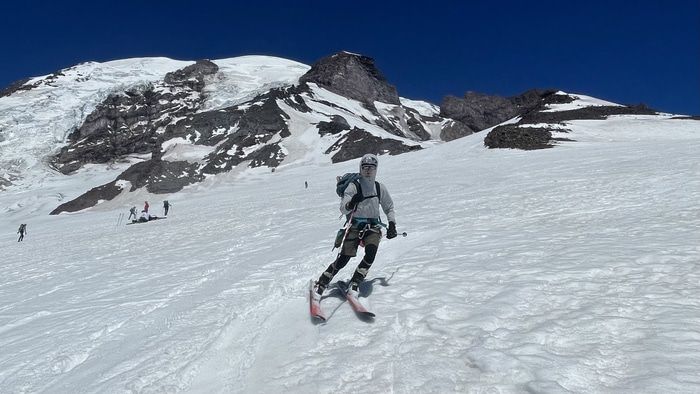 Browsing on a Chromebook using a SOCKS proxy

How to watch HBOGO abroad on your Chromebook? Turn on developer mode on your Chromebook Press Ctrl+Alt+T to open a shell window and type shell at the prompt Start a SOCKS proxy server on your laptop that forwards traffic through a server... Continue →