Monkey Face is a distinct pillar in the center of Smith Rock State Park outside of Bend, OR. One side of it resembles the face of a monkey (although, I would say ape) with eyes and forehead slanting away from a protruding mouth and nose. There’s also a relatively accessible climb, Pioneer Route, leading up the monkey’s neck, through its mouth, over the nose and up the forehead. In the end you get to stand on top of the monkey’s head with cliffs dropping away from you on all sides. 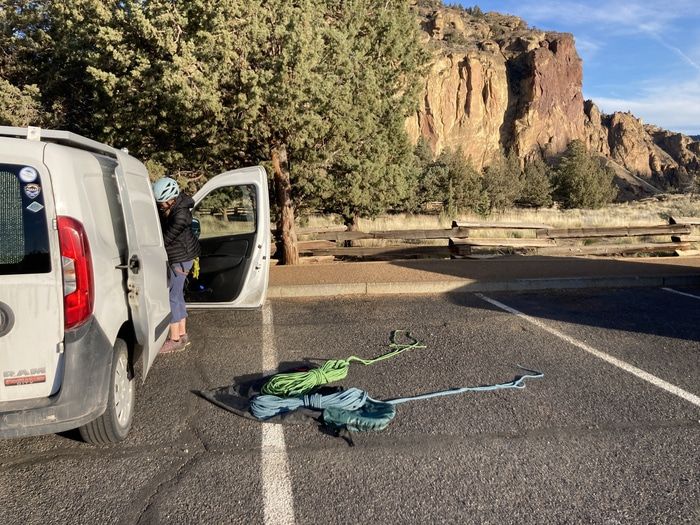 Getting ready in the parking lot

Cassondra and I saw the climb in March on our first visit to Smith Rock. A few friends of mine had climbed it about a decade ago. I think I missed out because I had moved back to the midwest. Either way, it sounded epic. Aid climbing a bolt ladder - something I had never done, and a 60m free hanging rappel - something guaranteed to make you poop your pants. It’s also frighteningly exposed on all sides and for someone who has been working through a fear of heights, looking at it up close was nauseating at times. 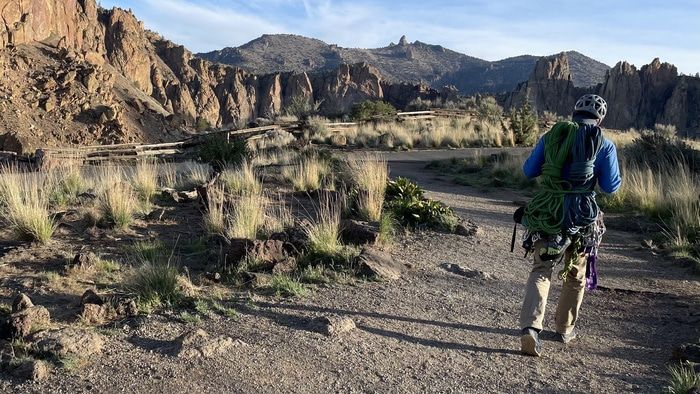 I watched two brave souls in March do the climb in 40 degree weather battling 20 mile per hour winds. It’s one of the coldest moments I remember feeling all winter. But the perfect weather finally arrived, highs in the 70’s and no wind, so we decided to go for it. We stayed in Bend the night before and thanks to Cassondra pulling out her A-game Spotify playlists, we were feeling the stoke when we arrived in the Smith Rock parking lot around 7:15am. Cassondra did some dancing in the parking lot and we headed up Misery Ridge towards the base of the climb. We had the ropes flaked and ready to climb around 8:30am. 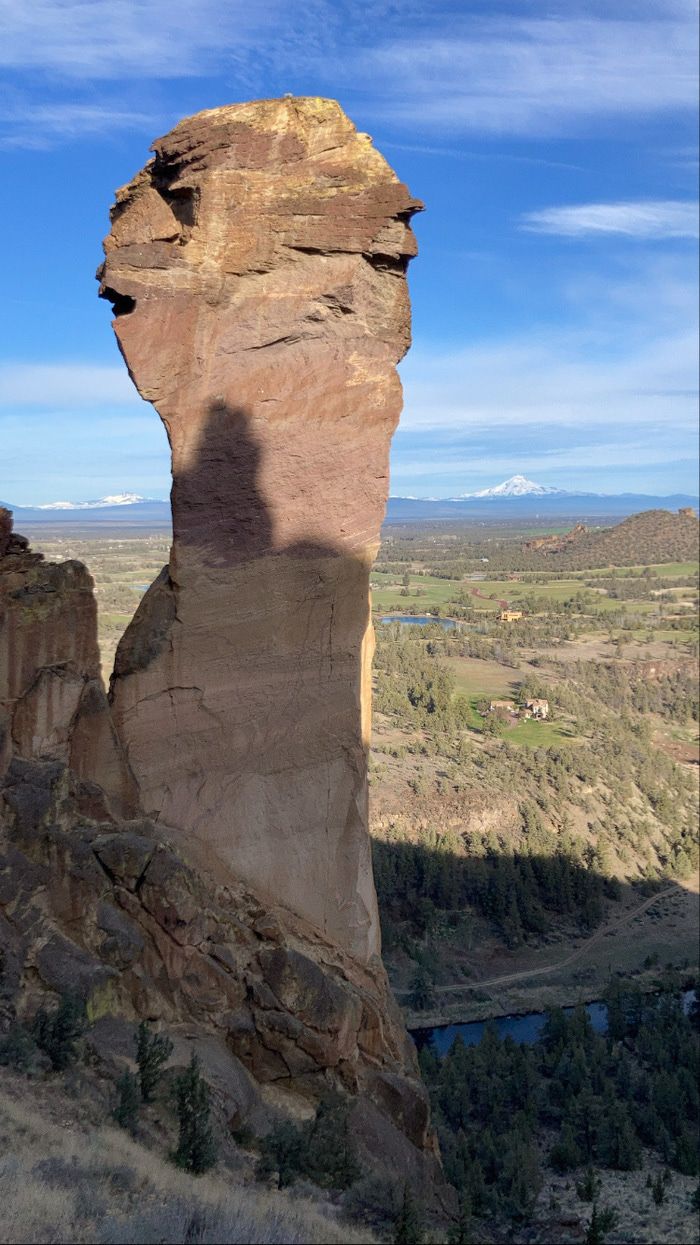 First view of the monkey

Right away I knew I made a bad decision. I brought only a single set of cams (.5-2), but the cracks on the first pitch were flaring and twisted, making cam placements tenuous. The climbing wasn’t hard and I managed, but if I do it again I’ll probably bring a set of nuts as there were great constrictions everywhere. The start of the pitch has 2 bolts, then trad and then there is a piton and two bolts at the end of the pitch. The top of the first pitch has a super comfy ledge for belaying and is not as scary as I imagined. 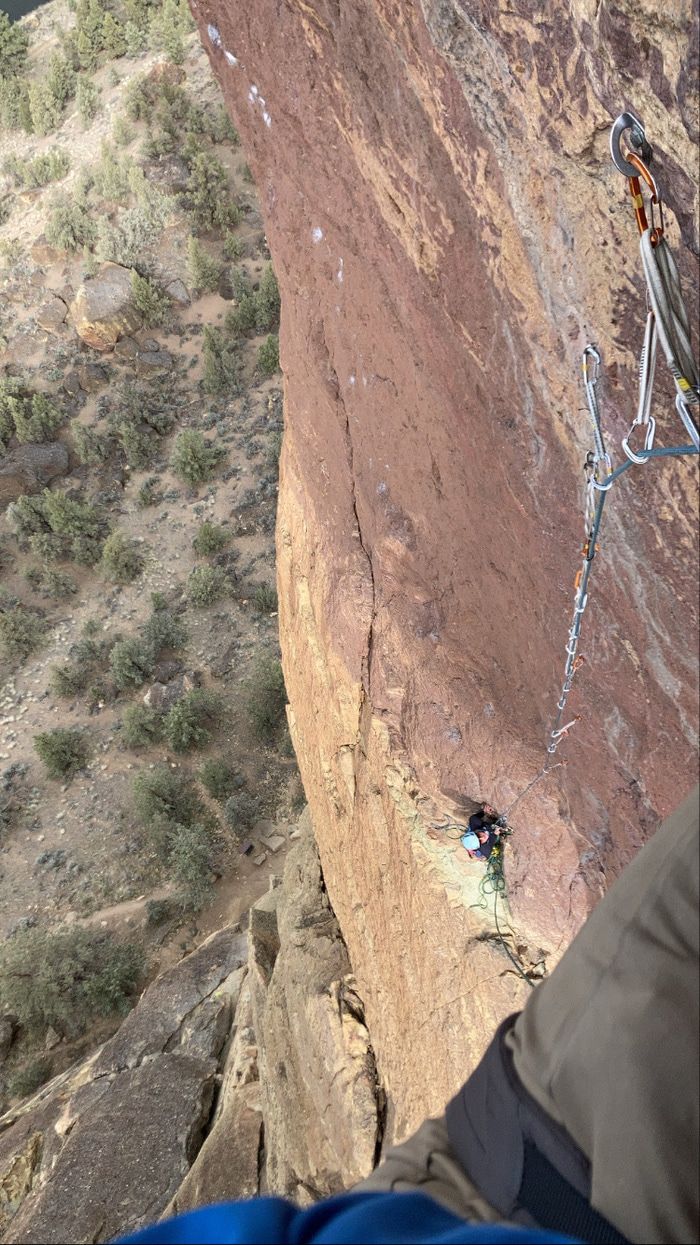 I brought 20 quick draws for the aid pitch. Ideally I’d say bring 21 because then you have enough to clip a few inside the monkey’s mouth before entering. I made my own aid ladder from some nylon tape. I tied two steps in it and it just reached the ground if I held the top at waist level. Cassondra used a full-on 8’ aid ladder which seemed a bit bulky but gave her a lot more options. Probably 75% of the bolts I could clip if I just hung from the bolt below it (I’m 5’ 11"). The last 4 bolts are very close, but either exhaustion or the increasing overhang made them feel like the crux. Getting over the lip of the monkey’s mouth was sloppy and I actually gripped a bolt with my finger to keep from falling out. Then I let out a big ‘woohooo’ and somebody on the ground ‘woohooo'ed back, which was cool.

Inside the monkey’s mouth 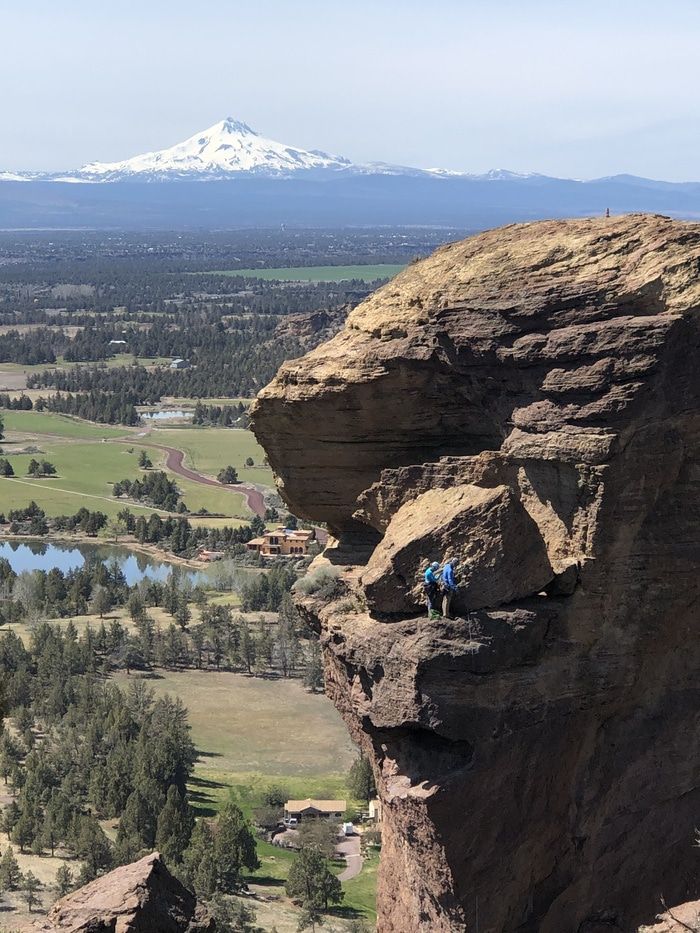 In front of the monkey’s nose

The next pitch is called Panic Point because you climb out of the monkeys mouth with 200’ feet of air below you. It’s easy to clip the first bolt before you step out and I highly recommend it because the exposure will make this climb feel much harder than it is. There’s definitely more of a sense of desperation when you see that much air below you and instead of making calm moves, you’re just clawing at anything that will hold you on the wall. The third pitch is only 3 bolts and in hind sight I would probably have linked pitches 3 and 4 because pitch 4 is an awkward up-and-down scramble that’s hard to protect with gear (I ended up just using a single slung horn) and there’s no point in stopping in-between. 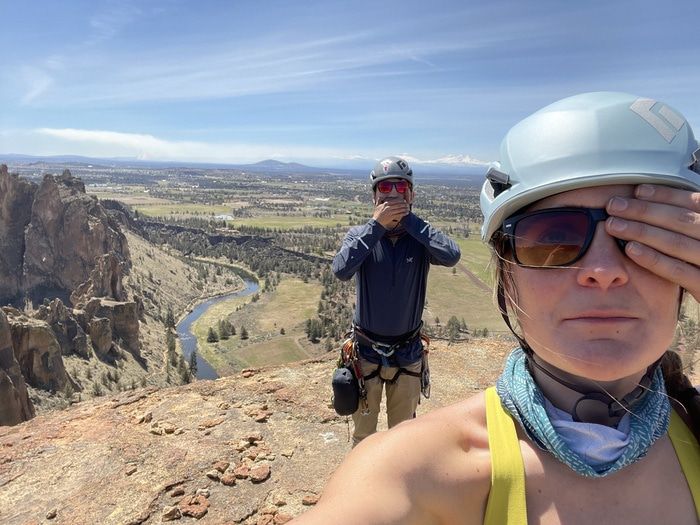 We stood on top of the monkey’s head at 1:30pm and ate some pocket snacks. At this point it was quite hot and we were feeling dehydrated so after some monkey business (pun) up top we made an awkward rap to the pitch 3 anchor which involved descending and climbing back out of a gap behind the monkeys nose. At the pitch 3 anchor, it was actually only our second time setting a two rope rappel and it took a while for us to feel confident in it, including an aborted rappel when I saw that one of our ropes had tangled and never reached the ground. We ended up re-throwing it in two separate coils. 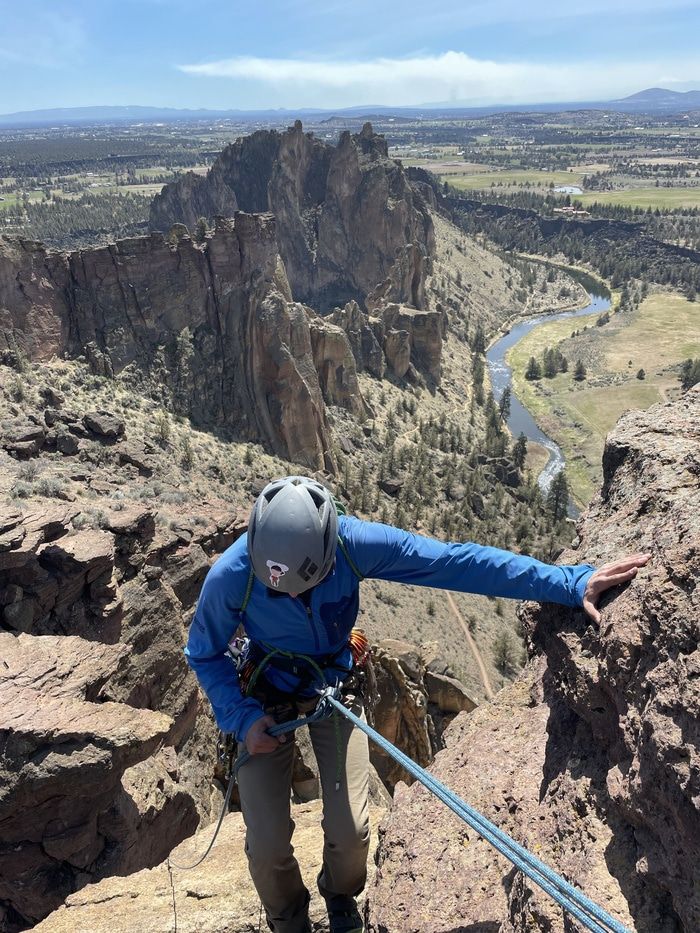 Lowering from the summit

I did not look down on the rappel. Blah. I still don’t enjoy heights. We made it down safe around 4pm and then a nice woman walked over and offered Cassondra some photos she took of her on rappel. Multiple times throughout the day people took and sent us photos and we even found some of us on Instagram that night when we searched under the Smith Rock location. Being the only people on the route mid-day, I think we were quite the attraction for the hikers. The climb was both easier and harder than I imagined. The climbing itself turned out to be easier, but it took longer than I expected and the sun exhaustion added up and we were really dragging our feet by the time we got back to the van. 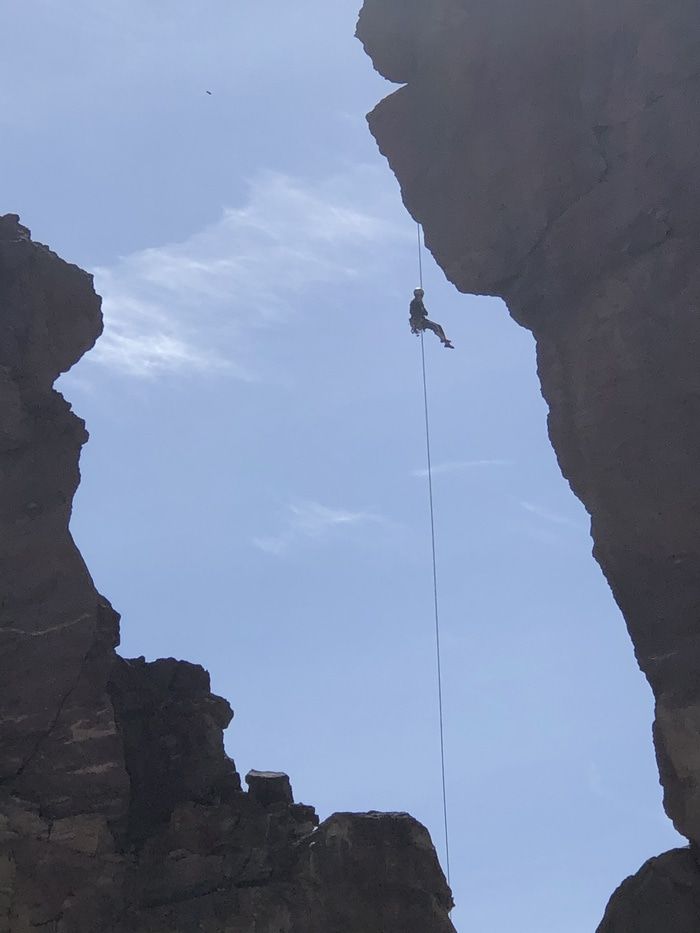 I think we’re both feeling super proud of this one. It might not be the hardest climbing we’ve done but it was so cool to stand on that pillar looking down at everybody and with the Sisters and Mt. Bachelor still snow covered in the distance. Definitely a day I will never forget.

ShadeMap now displays the sunniest and shadiest locations over the course of a day. Click the full day sun exposure button located near the lower left corner of the screen to try it in Manhattan. Initially ShadeMap answered the question:... Continue →