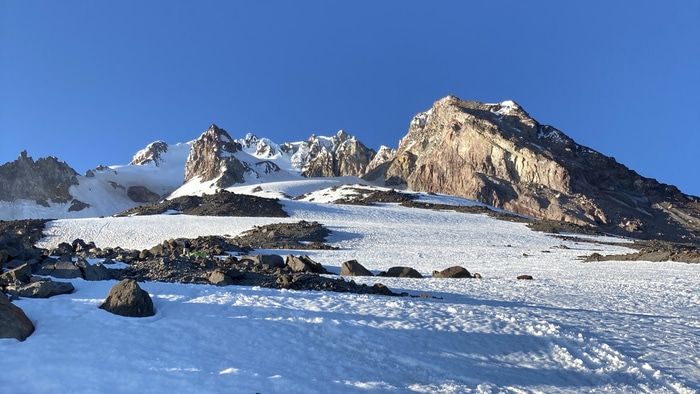 The summit forecast for the 5th of July was clear skies, winds at 10 miles per hour and temperatures just below freezing. Joe spent a couple of nights in Portland and I made my way through central Oregon. We met in an overflowing Timberline Lodge parking lot, sorted gear and hit the trail around 3pm. 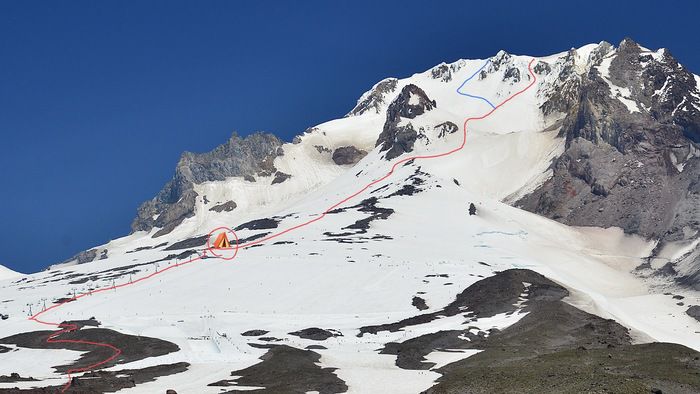 My pack felt surprisingly empty. I had barely been able to clip the top shut on Shasta but now it easily closed with room to spare. We made our way up the access road on the right side of the ski resort. The skies were clear and the sun’s rays were noticeably gentler than they had been in California. As we reached Silcox Hut I quizzed Joe about the packing list and that’s when I realized why my pack felt so small. I forgot to pack my sleeping bag. A night in the cold seemed more painful than running back to the parking lot, so I dropped my pack and returned to Silcox Hut in just under an hour. 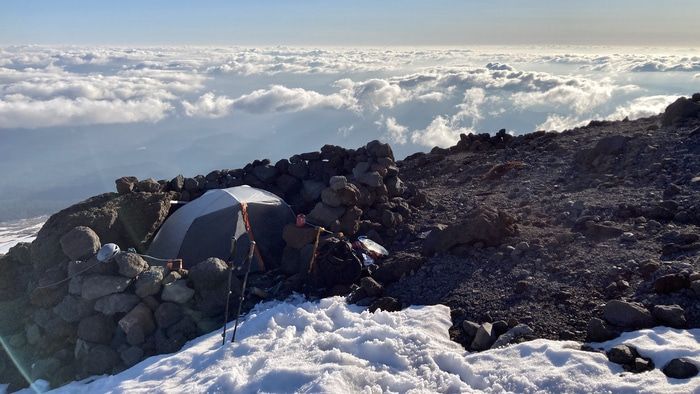 It was 5pm now. The ski resort was closed and we were the only climbers making their way uphill. Snow cats were grooming the upper runs for tomorrow’s guests. We went directly under the Palmer lift, fighting through mushy snow the entire way. The wind was picking up a bit now and the warmth of the sun was fading. Just above the top of the lift we found a rocky shelter on the west side of Triangle Moraine. It was barely big enough to fit the tent but it did a good job of cutting out the wind. 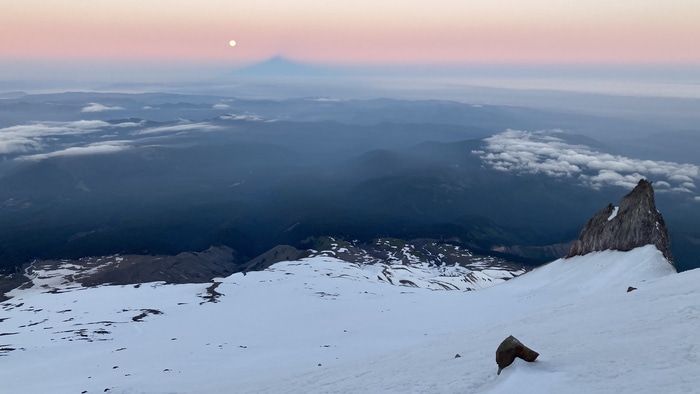 We didn’t see any running water but the hike up was relatively easy so Joe set to melting about 3 liters of snow including two boiled Nalgene bottles for the sleeping bags. We noticed two climbers playing around on the Hogsback at sunset and another two camped (Zach and Lauren) on the ridge a hundred feet above us. Otherwise there was nobody else on the mountain. We organized everything just as the sun was setting, snapped a few pics and tried to fall asleep. Timberline Lodge was setting off some fireworks below for the 4th of July. 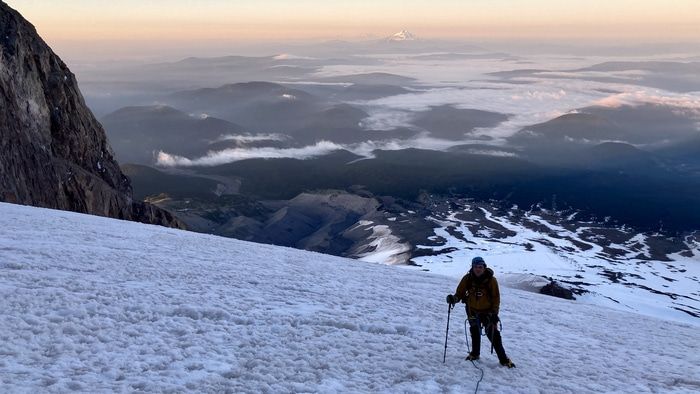 We woke up at 2:30am and were moving just shy of 4am. Some parties that started from the parking lot at midnight had already passed us and we could see a half a dozen more on their way up. I decided to rope up as it was my first time on the route and packed a few pickets in case the snow got very steep. No one else bothered with a rope. The sun started to come up as we reached the base of Crater Rock. A jaundiced full moon hung above the western horizon. The summit shadow stretched out below it and slightly to the right. 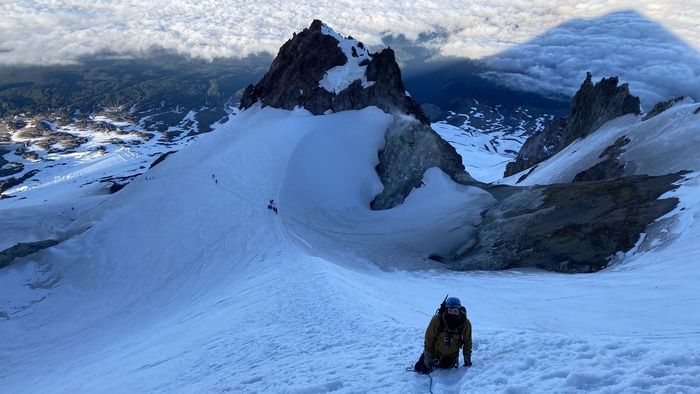 We saw one party go up the Hogsback and into the Pearly Gates while another party tried but down-climbed and opted for the Old Chute instead. People who summited the previous day told us they preferred Old Chute but heck, we wanted a challenge. And it was the shorter route to the summit.

Walking on the summit ridge

The Pearly Gates were not so Pearly. The icefall had mostly melted out and at the gates stood a large chossy boulder. What appeared to be a vertical wall of snow from the parking lot now turned into a 45 degree chute, still steep but manageable. We decided to go up the chute on the left side of the gates and while the snow was consistently steep with a long run out below, we managed to French it without bothering to put in any gear. When the chute eased up we unroped and walked the gradual snow slope to the summit. 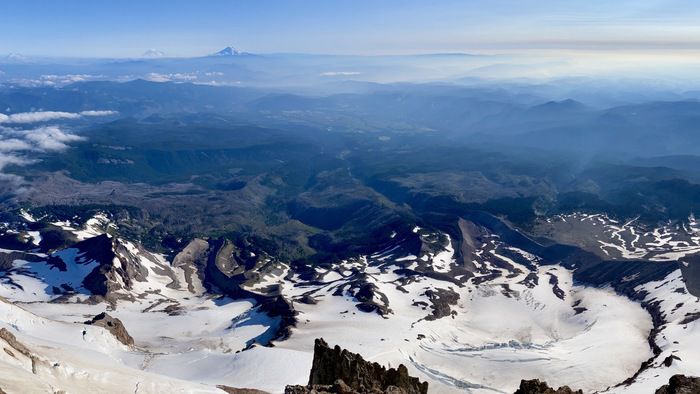 Looking north at Rainier and Adams

It was a perfect day. A light breeze with the sun already starting to warm the air. Mount Jefferson and Three Sisters clearly visible to the south with Rainier, Adams and St. Helens protruding to the north. The air felt thick and it reminded me of the Southern Alps of New Zealand or the Canadian Rockies where you can experience technical rock and ice without the punishing altitudes. One of my new favorite mountains. 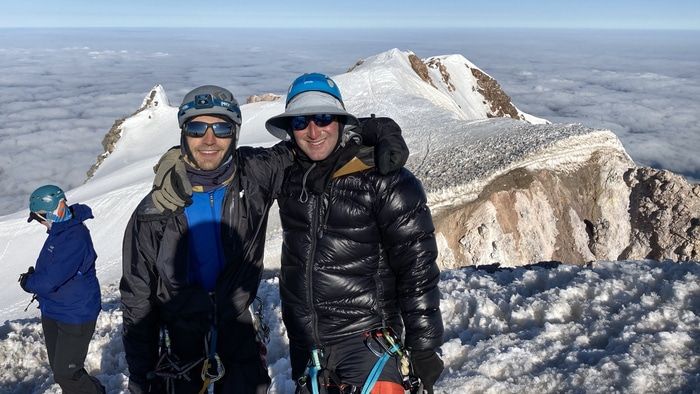 Like most people, we decided to descend the Old Chute and performed an ankle punishing traverse to the middle of the Hogsback. We ran into a forest ranger here who asked if we had a permit (we did) but never asked to see it. Just below Crater Rock we ditched the crampons and managed a few successful glissades. We rested in the tent for 30 minutes then packed up and scurried back to the lot by 1pm. The summit euphoria was now slowly fading and our thoughts turned to the north.