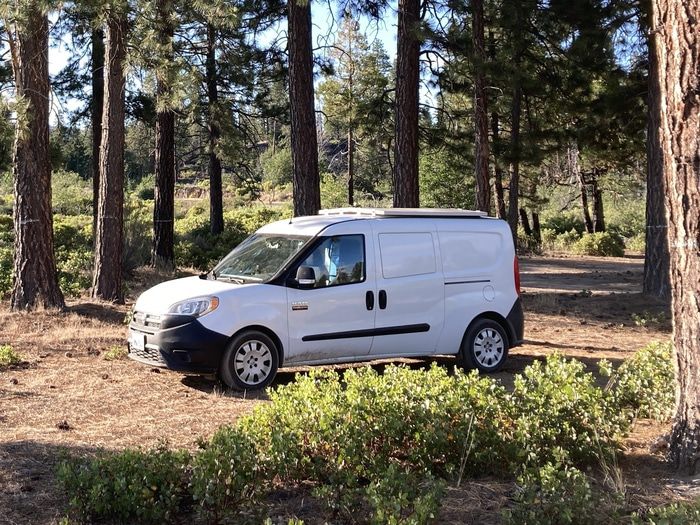 I’m considering selling my first camper van so I’m going to write down some notes for posterity. 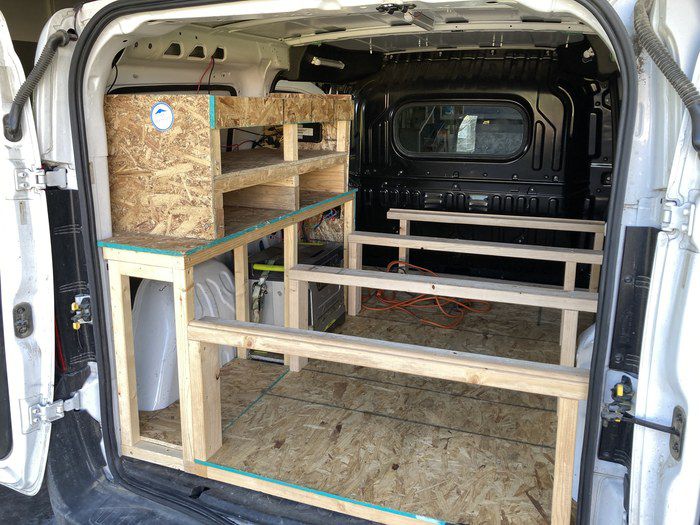 I bought the van from an electrician right after Covid restrictions went into place. Los Angeles would not be able to offer big city perks (meetups, lectures, clubs, food, socializing) during the lock-down so it was a good time to head into the mountains. The most important feature of the van had to be fuel efficiency because I wanted to move around frequently and not dread how much it was going to cost. I considered the Ford Transit Connect, Nissan NV200 and the Ram Promaster City. The Ram Promaster City had the largest cargo space and the best fuel efficiency (I’ve been able to top 31 mpg driving between Seattle and LA) on the highway, so that is what I went with. 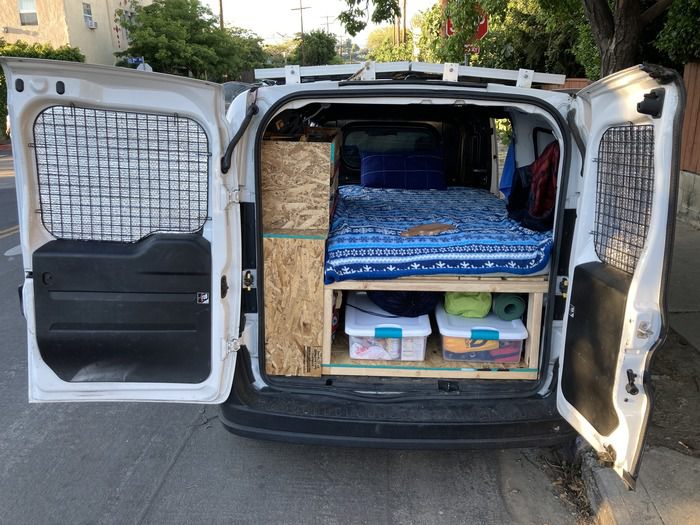 Bed with storage underneath

The electrician I bought the van from had already installed solar panels on the roof and wired them into a 1250Wh storage battery so he could charge his tools. On cloudy days, the storage battery could also be charged from the alternator while the car was running. I didn’t have a lot of tools at my disposal in Los Angeles so I rented a miter saw from Home Depot, cut up some 2x4s and screwed them together to make a basic bed frame with storage underneath. I then cut an old Ikea memory foam mattress to size, re-sewing the mattress cover and some custom sheets along the way. The bed was 38 inches wide which made it larger than a twin but smaller than a double, so I had to sew my own sheets. I also 12 volt cooler style refrigerator and placed it inside the rear driver door. 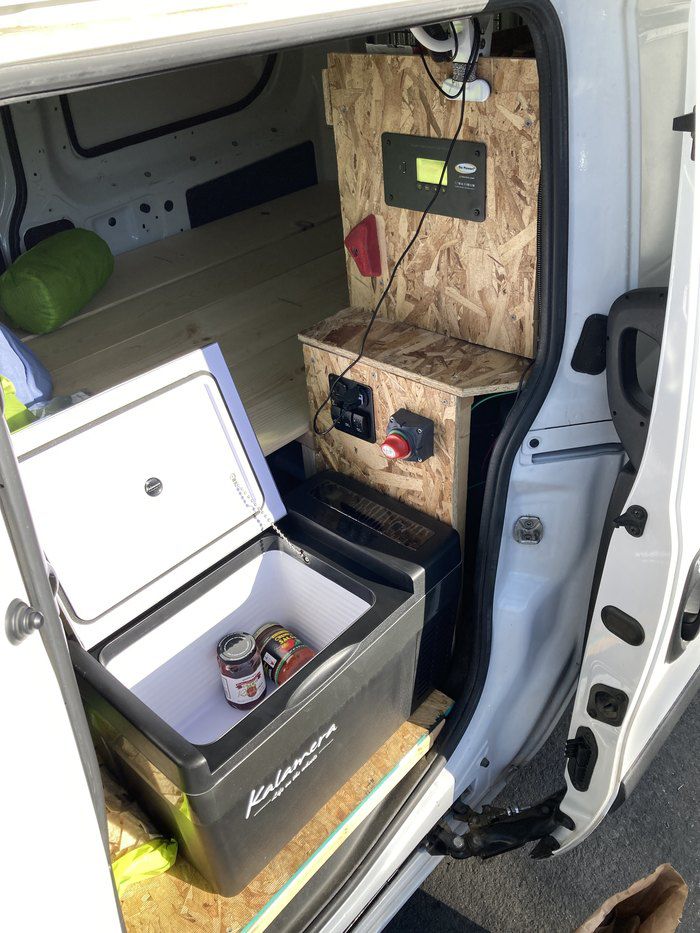 And off I went from Los Angeles to the mountains. The van drove well. The solar panels made plenty of power to run the refrigerator, laptop, cellphone and lights. Hot days were a bit hard as the van has no insulation, but my intention was never to “live” in the van. I would live outside and sleep in the van at night. After a few weeks I felt that the biggest limitation was storage under the bed. In order to get to my stuff, I had to take boxes out from under the bed, dig through them and put them back. Repeatedly pulling, bending and lifting during the day was a lot of work and the solution was storage drawers. In August, I drove to visit my mom and took the time to design and build van 2.0. I added 4 drawers, each capable of holding 100 lbs and slightly improved the shelving and refrigerator area as well. 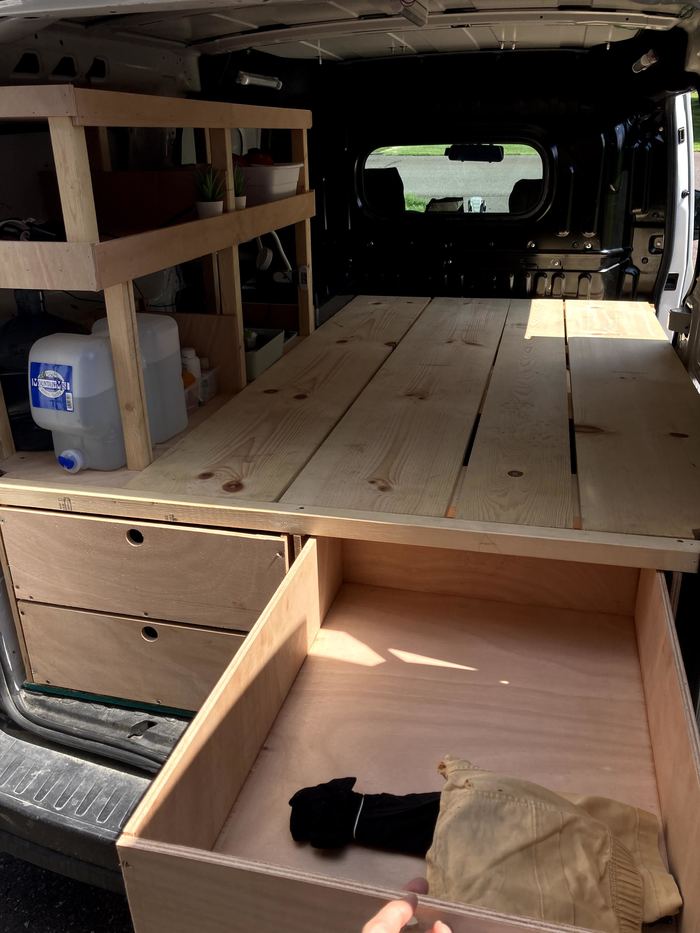 I met Cassondra around this time and we both loved spending time in the van. In fact we used it straight through the Washington winter. I remember a few nights below freezing at Mt Eleanor, Mt St Helens, Mt Bachelor and Middle Sister, OR. I bought an electric mattress pad for the winter, but it never felt quite right, always running either too hot or too cold to sleep on. The lowest temperature we slept in was 13 degrees Fahrenheit and even though the inside of the van was coated in frost, we were warm inside our sleeping bags. Not having ventilation also isn’t an issue. We simply crack the two side doors a bit to let air circulate. I bought mosquito netting to keep the bugs out, but in the last two years we have never had a mosquito in the van. Unbelievable. 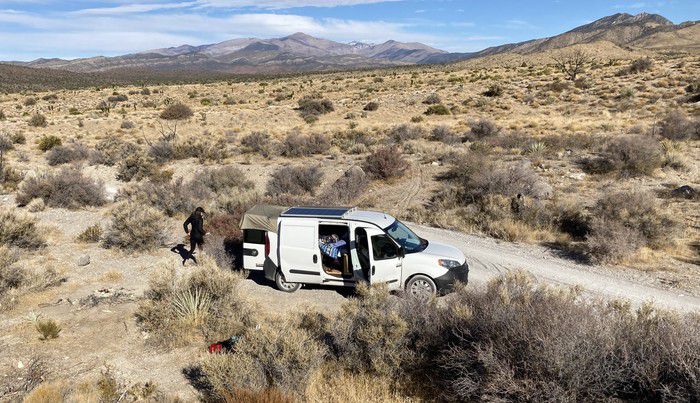 The last major improvement we made to the van was when we traveled to the Tetons last summer. There is a hard divider between the driver compartment and the rear cargo area. It has a glass window in it so you can look in the back but you can’t access it without stepping outside. We managed to remove the glass from the window and now we could acrobatically crawl between the driver compartment and cargo area without exiting the van. This was great for grabbing some food, charging electronics or taking a nap while we drove. It also feels like crawling through an airlock on an old spacecraft. 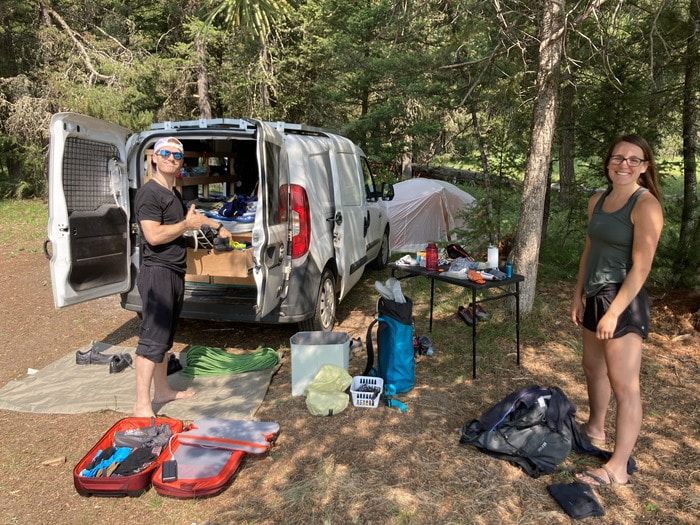 Base camp in the Tetons

I love the van. It drives like a car. It blends in like a car so you can take a nap anywhere. It’s never had any issues aside from a few flat tires. So why am I selling it? A few reasons. The deeper we go into the mountains, the harder it is for the van to get there because of its low clearance and 2-wheel drive. Although it has the best mpg on the highway, more and more I find myself driving it around Seattle and the city mileage is not that great. I’d also like to do another van build, this time using a more precise tool like a CNC to take better advantage of all the available space. And hopefully the next van will be electric. 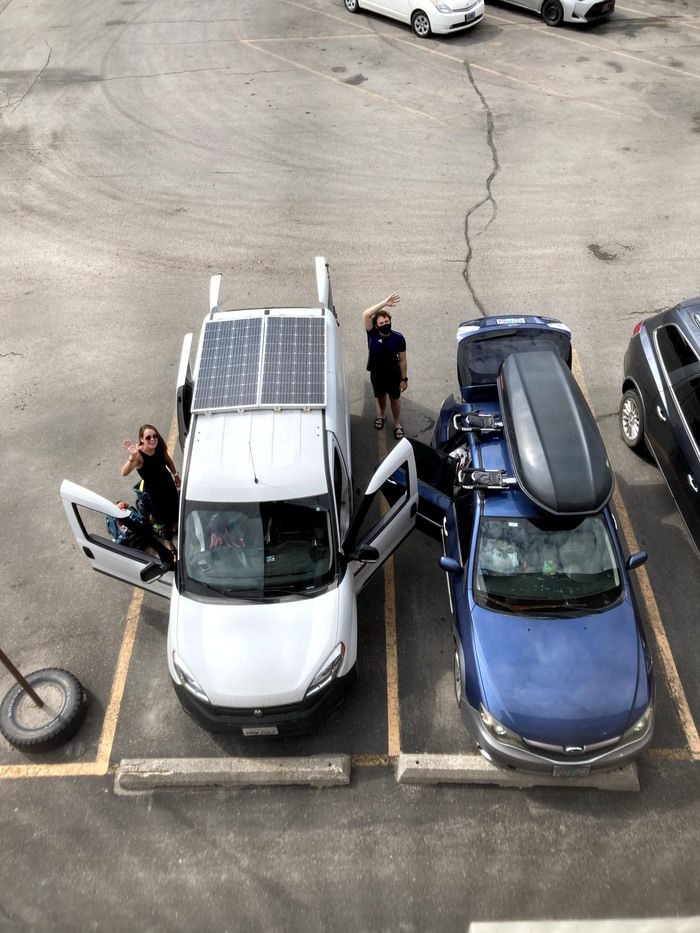 Bonus: A video walk-through I filmed for my dad when he borrowed the van for a trip to Canada: https://www.youtube.com/watch?v=tVHMz2bIfgo

Looking at the route from the parking lot This past weekend I completed my first “long” trad climb. Six pitches and 800 feet of climbing is more lead time than I’ve ever completed in a single day, so let’s celebrate Rated as 5.4 overall... Continue →