A couple of exciting things have happened during the past three months: 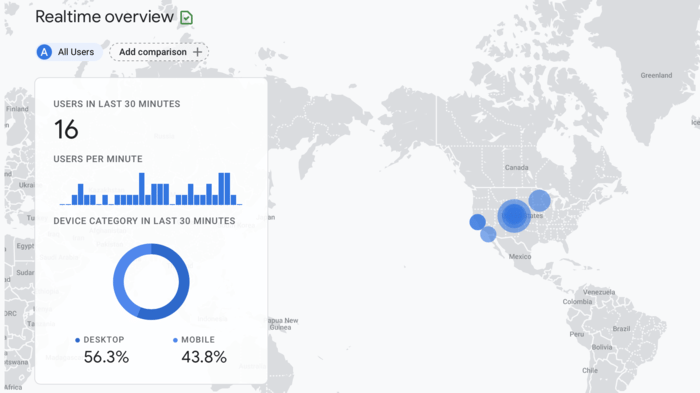 I always anticipated that Hacker News would be the place to get traffic from. The users are highly technical and appreciate novel uses of technology. It may still be true that Shade Map would be a big hit IF it made it to the front page but without gaming the system it’s proved impossible to get enough upvotes. Shade Map is visual eye candy and it’s hard to showcase that on a text based community like HN.

I’ve never been a reddit user, but I posted a link to Shade Map in r/webgl and received some modest interest and valuable feedback. I stumbled across r/MapPorn at some point and its visual nature captured my attention. It’s true what they say about a picture being worth a thousand words. I created a 15 second video of shadows during the summer solstice in Alaska and posted it. The response was awesome and about 500 people visited Shade Map that day. I also made a quick video of sunrise to sunset shadows of Los Angeles and it also went viral. I will definitely continue to focus on conveying the visual aspects of Shade Map whenever I share it with others.

Yesterday I woke up and noticed that Shade Map was receiving a large influx of traffic. The traffic was coming from an email link so it was hard to pin down, but eventually I found the source. Shade Map had received a shoutout on California Sun. Seeing your work shared around by others is extremely validating and what I think is necessary to spread the word. In the long term, I hope users of Shade Map are its biggest promoters.

In May, the performance of the shadow casting algorithm finally reached a level I was happy with. The main improvement was discovering that break statements in OpenGL loops do not work as expected and I was doing a lot of extra calculations that were unnecessary. I also managed to compress the elevation data which reduced GPU memory usage in half. The result was about a 4x improvement in performance and noticeably less lag when displaying shadows around sunrise and sunset. 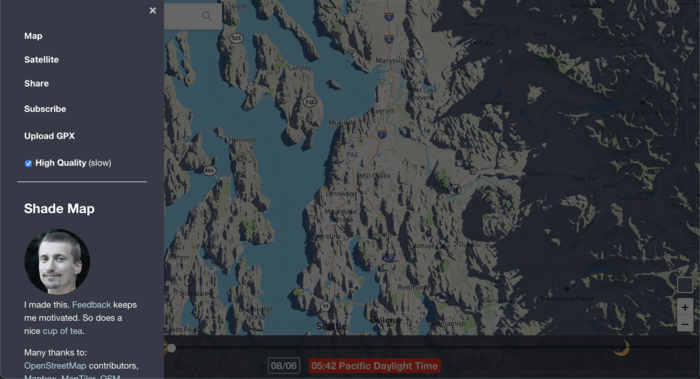 I wanted to add more features while keeping the map interface clean so I ended up implementing a hamburger menu on the website. It contains an option to toggle between Map and Satellite view, a link to subscribe to the Shade Map mailing list (4 subscribers, lol), the ability to upload a GPX track and display it on the map (useful for planning shaded hikes) and a toggle for high-resolution shadows on retina screens. It also has a blurb about me and a buy me a tea donation link plus my email address for suggestions. No donations yet, so I’m brewing my tea at home.

Finally, I added a search bar and building shadows that appear at high zoom levels in big cities. Only 2% of users use the search which surprised me. It may indicate that people like playing with Shade Map but don’t use it to research shade in specific locations.

The bills came due last month. Even though Mapbox and MapTiler have generous free-tiers for their map tiles, the huge spikes in traffic from Reddit blew through them in just a few days and I had to shell out my first $50 to keep the site running. I’m 75% through my June quota with more than 3 weeks to go. Yikes.

Shade Map will have to bring in some $$$ to make it sustainable. Advertising is an obvious strategy but I don’t want to plaster ads on the page and slow down load times. Finding a single sponsor for the site would be cool, but I’m not sure who would do this. Another project similar to Shade Map charges a premium for being able to display shadows for dates other than today. Maybe I could do similar to upload a GPX file? I also thought about releasing an Android/iOS app with offline maps for some ludicrous amount like $15 for the diehard fans. That will be a lot of effort.

People have contacted me that are working on similar efforts but using modern high resolution LIDAR elevation data. Shade Map uses radar elevation data from the early 2000’s. Luckily mountains don’t change much. One idea is to sell the Shade Map rendering engine but allow customers to supply their own high resolution elevation data for specific regions (like a really detailed map of Berlin, where every tree and lamp post is included). Another feedback I received was embedding Shade Map on weather websites so you can not only see the temperature, radar and cloud imagery for an area, but also the shadows.

Without a funding source, Shade Map has likely reached its natural limits. It’s either time to double down or work on something new.

3D printing is the process of creating models by stacking layers of thermoplastic on top of each other. It’s similar to icing a cake. There are some rules to follow. Each additional vertical layer can only overhang the previous layer at... Continue →